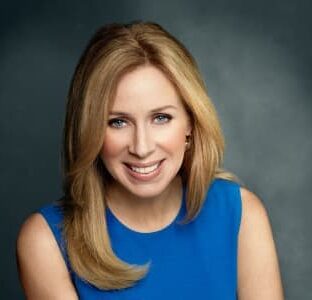 Becky Quick (Born; Rebecca Quick) is an American media personality serving as a co-anchor of CNBC’s ‘Squawk Box’. She formerly anchored the nationally syndicated “On the Money,” which was produced by CNBC and was also a reporter for The Wall Street Journal (WSJ).

Throughout her career, she has covered retail, e-commerce, the Internet, finance, and foreign affairs. She played an important role in launching The Wall Street Journal Online, where she served as the international news editor.

Becky attended Andrean High School and later joined Rutgers University where she graduated with a Bachelor of Arts degree in Political Science and Government in 1993.

Becky has not revealed the names of her parents but she has said her father was a geologist while her mother was a teacher. Her father ventured into the oil industry and became successful after the oil boom in the 1970s and 1980s.

She has three younger brothers. In 2013 during a CNBC “Squawk Box” on Phil LeBeau’s Telsa’s Model S test drive she said that her parents “used to make my brothers take empty bottles with them when we traveled because they refused to stop even for bathroom breaks.”

Becky is Jewish by religion.

Becky is married to Matt Quayle. The couple got married in 2008. Matthew Quayle is a business and financial journalist. He is a veteran CNBC producer and co-creator of co-creator of “Squawk Box” and “Squawk on the Street.” He joined CNBC as an intern while he was still in college. In 2020, he was honored as a 2020 Business News Visionary.

CNBC however refuted the claims in a statement to Page Six, “All three anchors on ‘Squawk Box’ – Becky Quick, Joe Kernen and Carl Quintanilla – have married CNBC producers. Love is in the air when you’re first in business worldwide.”

Becky was previously married to Peter Shay, a computer programmer. The couple got married in January 2006 but they divorced in 2008. According to some sources, the cause of their divorce was an extramarital affair on Becky’s side. It is alleged she had an affair with her current husband, Matt Quayle. The information is just speculation we have no way to verify if it is true.

Becky is a mother to two children a son known as Kyle Nathaniel Quayle, born on August 26, 2011 and a daughter known as Kaylie Noelle Quayle born in October 2016. She is also a stepmother to Matt’s two daughters from his previous marriage, Natalie and Kimiko.

Quick is a co-anchor of CNBC’s Squawk Box alongside Joe Kernen and Andrew Ross Sorkin and airs weekdays, 6-9 AM ET.   She previously anchored the nationally syndicated “On the Money,” which was produced by CNBC, and also authored a regular column for Fortune magazine. She joined CNBC in February 2001.

During her tenure, she has interviewed investor giants Warren Buffett, Bill Gates, Alan Greenspan, T. Boone Pickens, Jamie Dimon, Charlie Munger among others. She also has interviewed three U.S. presidents and has hosted panels at some of the most prestigious conferences in the world such as the Microsoft CEO Conference, Fortune’s Most Powerful Women’s Conference and the Allen & Co. Sun Valley Media Conference.

She began her career as an editor of The Daily Targum.

Becky does not work for MSNBC but the sister channel CNBC where she co-hosts ‘Squawk Box.’

“I’m not his favorite! Carol Loomis at Fortune is his favorite. I got to be on Warren’s list by being a pain in the rear. He likes it when you go to his annual meeting because that’s his big party every year, so I went to that. And then I found out he was going to China in September 2007, and I called him up and was so nervous and asked him if I could come. There was this long pause and then finally he said, ‘O.K.’ We ended up talking on the whole plane ride over, for about 12 hours. We’re both from the Midwest, so we spoke each other’s language. It was on that trip and that plane ride we really hit it off.”

Becky has not public revealed her political affiliation but in 2015 she moderated the third Republican presidential debate.

She has a net worth of $15 million dollars. This is a combined net worth with her husband, Matt Quayle.

Becky has no known illness as of 2021 but her daughter has an underlying condition which she has not revealed yet.