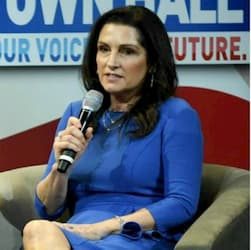 Becki Tilley is the wife of Jerry Falwell Jr., president of Liberty University. She is alleged to have had an affair with Giancarlo Granda who at the time of the meeting was working as a pool attendant at the Fontainebleau Miami Beach hotel.

Becki is the wife of Jerry Falwell Jr. The couple met when Becki was 13 and Jerry was 16. The couple didn’t begin to date until five years later when Tilley was a freshman at the University of Virginia. The couple got married in 1987 at the Prayer Chapel at Liberty University in a private ceremony that was officiated by the late pastor Jerry Falwell Sr.

Jerry Falwell Jr.is an American attorney and academic administrator. Hae is the president of Liberty University in Lynchburg, Virginia but on August 7, 2020 he took an indefinite leave of absence after he posted a controversial photograph of himself on social media.

Granda and the Falwell’s went into business together; while he was living in Washington, D.C. and attended Georgetown University he proposed a business plan to purchase, renovate, and run a hostel in the Miami area. Falwell later said they lent him money from a shell company to Alton Hostel LLC, which was controlled by Falwell’s wife, son, and Granda, to make the deal.

The court case arose when two other men, Jesus Fernandez Sr. and Jr., sued Granda and the Falwells saying they had been promised a cut of the deal, but the money for them never materialized.

Jerry issued a statement confirming the affair which he said led to him suffering from depression after the man in question threatened to expose it.

“During a vacation over eight years ago, Becki and I met an ambitious young man who was working at our hotel and was saving up his money to go to school. We encouraged him to pursue an education and a career and we were impressed by his initiative in suggesting a local real estate opportunity. My family members eventually made an investment in a local property, included him in the deal because he could play an active role in managing it, and became close with him and his family.

Shortly thereafter, Becki had an inappropriate personal relationship with this person, something in which I was not involved — it was nonetheless very upsetting to learn about. After I learned this, I lost 80 pounds and people who saw me regularly thought that I was physically unwell, when in reality I was just balancing how to be most supportive of Becki, who I love, while also reflecting and praying about whether there were ways I could have been more supportive of her and given her proper attention…

During the years that followed, we got to know his family and other loved ones, good people who also really care about him. They shared and confirmed to us that he has periodically demonstrated emotionally unstable behaviors with some destructive tendencies, seemingly in response to his inability to achieve his professional goals. Based on information from other sources, we believe that he may have targeted other successful women in similar ways.

While we tried to distance ourselves from him over time, he unfortunately became increasingly angry and aggressive. Eventually, he began threatening to publicly reveal this secret relationship with Becki and to deliberately embarrass my wife, family, and Liberty University unless we agreed to pay him substantial monies. While this was very upsetting, we had been advised by trusted legal counsel that it was best to maintain contact with this person, as we tried to manage his increasingly erratic behavior and unreasonable demands while extricating ourselves from him both on a personal level and from that real estate transaction.”

Granda issued a statement denying the accusations. “The Falwell’s attempt to sandbag me, and the Examiner, with a last-minute story without providing the Examiner clear evidence that this was not simply an ‘affair’ with concocted allegations of extortion reeks desperation. The WHOLE truth will come out.”