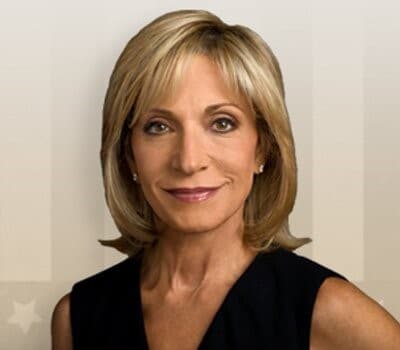 Andrea Mitchell is an American media personality working   for NBC News as the Chief Foreign Affairs & Senior Washington Correspondent. She anchors Andrea Mitchell Reports airing from 12:00 noon to 1:00 p.m. ET weekdays on MSNBC and has appeared on and guest hosted Meet the Press, and is often a guest on Hardball with Chris Matthews and The Rachel Maddow Show.

Mitchell attended New Rochelle High School before joining the University of Pennsylvania where she received a Bachelor of Arts degree in English literature in 1967.

Mitchell was raised in a Jewish family as the daughter of Cecile Mitchell and Sydney (Rubenstein) Mitchell. Her father was the chief executive officer and partial owner of a furniture manufacturing company in Manhattan. He was also the president of Beth El Synagogue in New Rochelle for 40 years. Her mother was an administrator at the New York Institute of Technology in Manhattan.

Andrea was brought up alongside her sister Susan Greenstein who is a professor and her brother  Arthur Mitchell i Canadian politician, who was a member of the Legislative Assembly of Yukon and the Leader of the Official Opposition from 2006 to 2011. He is a former real estate agent and an assistant to John Ostashek and the Yukon Party Government Leader (Premier) from 1992 to 1996. He was elected leader in June 2005 in a leadership race against Pat Duncan, the Yukon’s first Liberal premier, and remained leader until his defeat in the 2011 Yukon election. He has also served as alternate chair of the Yukon Worker’s Compensation Health and Safety Board and on the City of Whitehorse Parks and Recreation Board.

Mitchell is  married to Alan Greenspan , an American economist who served as Chair of the Federal Reserve of the United States from 1987 to 2006. He works as a private adviser and provides consulting for firms through his company, Greenspan Associates LLC.  and attended  New York University’s Stern School of Business, where he earned a B.A. degree in economics summa cum laude in 1948 and an M.A. degree in economics in 1950. Andrea and Alan exchanged their marriage vows  on April 6, 1997, following a lengthy relationship.  She was previously married to Gil Jackson ,a black man who worked in the public affairs department at Smith, Kline & French (now GlaxoSmithKline) while struggling to launch a career as an independent film producer and suffered from multiple sclerosis. However ,the marriage ended in divorce in the mid-1970s.

Andrea has no children of her own but she mentions her role as godmother to the three children of her NBC News colleague Judy Woodruff, commenting that “In many ways, they and my nieces and nephew have become surrogates for the children I never had.

Andrea announced on air that she had been diagnosed with breast cancer in 2011.“I had planned to be hiking in Wyoming last week, but instead discovered that I am now among the one in eight women in this country — incredibly, one in eight — who have had breast cancer,” said the host of “Andrea Mitchell Reports” . She reported that the cancer was found during a recent annual screening and had been caught in its early stages.

“I’m looking at this as another of life’s lessons,” said Mitchell, who described her prognosis as “terrific.” and  encouraged other women to get regular screenings.

“For you women out there and the men who love you, screening matters,” she said. “Do it. This disease can be completely curable if you find it, at the right time.”

Andrea was recently selected as a 2017 Daughter of Pennsylvania. She and the other 2017 honorees were recognized at ceremony hosted by Pennsylvania Governor Tom Wolf and First Lady Frances Wolf. Since 1949, the Distinguished Daughters of Pennsylvania and the Governor’s Office have recognized outstanding women for their extraordinary service and contributions to Pennsylvania. Distinguished Daughters honors women whose professional and philanthropic work has earned regional, statewide, or national recognition and provides value to the public

Andrea is the chief foreign affairs correspondent for NBC News, is also the host of “Andrea Mitchell Reports,” an hour of political and foreign policy news airing each day at 12 p.m. ET on MSNBC.

Since joining NBC News in 1978, Mitchell has covered seven presidential administrations, Capitol Hill, and, since 1994, the State Department and intelligence agencies. She reports regularly on “NBC Nightly News with Lester Holt,” “TODAY” and “Meet the Press with Chuck Todd.” Mitchell’s in-depth journalism from around the world includes all of the Reagan/Gorbachev arms control summits, a series of exclusive interviews with Cuba’s late President Fidel Castro, the diplomatic normalization with Havana, the Iran nuclear negotiations, conflicts in Haiti, Bosnia and Kosovo as well as assignments in Iraq, Afghanistan, Iran, North Korea, Pakistan, Israel and the Palestinian territories. She has also covered every presidential campaign for NBC News since 1980, most recently as the lead correspondent assigned to Hillary Clinton throughout 2016.

Prior to joining ABC News, she served as news director of student radio station WXPN and  was hired as a reporter at KYW radio and later became the station’s City Hall correspondent, during the Mayor Frank Rizzo’s administration and also reported for sister station KYW-TV before moving  to CBS-affiliate WTOP (now WUSA) in Washington, D.C., in 1976.

In February 2019, Mitchell characterized the Warsaw Ghetto Uprising as being against “the Polish and Nazi regime.” She apologized on Twitter for her comment. Alleging that Mitchell had criticized Poland’s role in the Holocaust, the Polish Institute of National Remembrance sued Mitchell in Polish court.

During an appearance on MSNBC on June 5, 2008, Mitchell referred to the voters of the southwest Virginia region as rednecks. On June 9, she apologized on air, saying “I owe an apology to the good people of Bristol, Virginia, for something stupid that I said last week. I was trying to explain, based on reporting from Democratic strategists, why Barack Obama was campaigning in southwest Virginia, but without attribution or explanation, I used a term strategists often use to demean an entire community. No excuses, I’m really sorry.”

During a July 2005 news conference in Khartoum, Mitchell was forcibly ejected from a room after asking Sudanese President Omar al-Bashir some pointed questions. They included: “Can you tell us why the violence is continuing?” (referring to genocide in Sudan’s Darfur province) and “Can you tell us why the government is supporting the militias?” “Why should Americans believe your promises?” At this point two armed security guards grabbed her and forcibly shoved her out of the room. After the incident Mitchell said, “It is our job to ask. They can always say ‘no comment’… but to drag a reporter out just for asking is inexcusable behavior.”

A report in The Washington Post (“Bush Administration Is Focus of Inquiry CIA Agent’s Identity Was Leaked to Media” by Mike Allen and Dana Priest, The Washington Post, September 28, 2003) that Mitchell had leaked Valerie Plame’s identity led to her being questioned by the Federal Bureau of Investigation. While Mitchell never appeared before the investigating grand jury or in I. Lewis Libby’s trial, she was on the subpoena list as a person of interest.

In October 2003, on the Capitol Report, Mitchell made a statement which Libby’s defense construed to mean it was widely known among journalists that Joe Wilson’s wife was in the Central Intelligence Agency (CIA), a position she later clarified by answering the question of how widely known it was in Washington that Wilson’s wife worked for the CIA. “It was widely known amongst those of us who cover the intelligence community and who were actively engaged in trying to track down who among the foreign service community was the envoy to Niger. But frankly I wasn’t aware of her actual role at the CIA and the fact that she had a covert role involving weapons of mass destruction, not until Bob Novak wrote it.”

In September 2005, Mitchell authored the best seller, “Talking Back,” a memoir about her experiences as one of the first women in broadcast news.

She has estimated net worth of $5million.