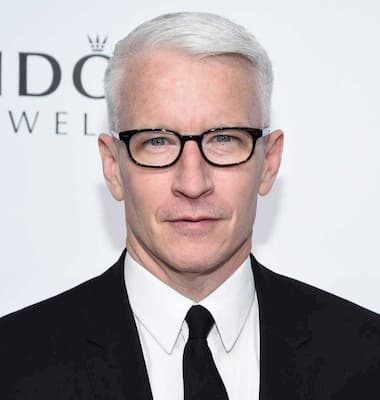 Anderson Hays Cooper  is an American media personality working as an anchor of the CNN news broadcast Anderson Cooper 360°. He also serves as a correspondent for 60 Minutes on CBS and also  hosts  his own eponymous syndicated daytime talk show, Anderson Live.

Cooper attended the Dalton School, a private co-educational university preparatory day school in the Upper East Side neighborhood of Manhattan where he graduated a semester early .He then  attended Yale University, where he resided in Trumbull College and  was inducted into the Manuscript Society, majoring in political science and graduating with a Bachelor of Arts in 1989.

Anderson is the son of  Wyatt Emory Cooper and Gloria Vanderbilt . His father was an artist  and suffered a series of heart attacks while undergoing open-heart surgery, and died January 5, 1978, at the age of 50 . Cooper considers his father’s book Families to be sort of a guide on how he would have wanted him to live his  life and the choices he would have wanted him to make. His mother is  a fashion designer, writer, and heiress and died in 2019 at the age of 95. Throughout her life, Anderson maintained a close relationship with his mother, creating the 2016 documentary about Vanderbilt and their relationship as well as publishing a collection of correspondence The Rainbow Comes and Goes; A Mother and Son on Life, Love, and Loss in 2017.

Following her death on June 17, 2019, Anderson delivered a moving eulogy for his mother on CNN, saying, “The last few weeks, every time I kissed her goodbye, I’d say, “I love you, mom.” She would look at me, and say, “I love you, too. You know that.” And she was right. I did know that. I knew it from the moment I was born, and I’ll know it for the rest of my life. And, in the end, what greater gift can a mother give to her son?”

Cooper was brought up alongside his brother  Carter Vanderbilt Cooper, who  died by suicide on July 22, 1988, at age 23, by jumping from the 14th-floor terrace of Vanderbilt’s New York City penthouse apartment. His mother Gloria later wrote about her son’s death in the book A Mother’s Story, in which she expressed her belief that the suicide was caused by a psychotic episode induced by an allergy to the anti-asthma prescription drug salbutamol. He also have two half brothers from her mother’s previous marriage to  conductor Leopold Stokowski, Leopold Stanislaus Stokowski and  Christopher Stokowski.

Cooper is openly gay; according to The New York Times, he is “the most prominent openly gay journalist on American television. He confirmed his split with boyfriend Benjamin Maisani in 2018. “Benjamin and I separated as boyfriends some time ago. We are still family to each other, and love each other very much… we remain the best of friends, and will continue to share much of our lives together.” He was later  linked to Victor Lopez but ended the relationship after an year. The breakup opened the door for a relationship between Anderson and long-time pal, Andy Cohen.

Anderson Cooper recently announced the birth of his son Wyatt Cooper. He explained via a lengthy Instagram post that Wyatt came into the world via surrogate on 27th April 2020. Anderson explained that his late parents inspired his son’s name. “He is named after my father, who died when I was ten. I hope I can be as good a dad as he was. My son’s middle name is Morgan. It’s a family name on my mom’s side. I know my mom and dad like the name Morgan because I recently found a list they made 52 years ago when they were trying to think of names for me. Wyatt Morgan Cooper. My son”

Cooper joined CNN in 2001 as a co- anchor alongside Paula Zahn on American Morning. In 2002 he became CNN’s weekend prime-time anchor. Since 2002, he has hosted CNN’s New Year’s Eve special from Times Square. In September 8, 2003, he  became the anchor of Anderson Cooper 360° on CNN. In 2005 Cooper covered a number of important stories, including the tsunami damage in Sri Lanka; the Cedar Revolution in Beirut, Lebanon; the death of Pope John Paul II; and the royal wedding of Prince Charles and Camilla Parker Bowles. In August 2005, he covered the Niger famine from Maradi.

In early 2007 he signed a multi-year deal with CNN that would allow him to continue as a contributor to 60 Minutes, as well as doubling his salary from $2 million annually to a reported $4 million. In 2007 he began hosting CNN Heroes: An All-Star Tribute, a show which honors and recognizes extraordinary deeds by ordinary people. In October 2007 he began hosting the documentary Planet in Peril, with Sanjay Gupta and Jeff Corwin on CNN. In 2008, Cooper, Gupta, and Lisa Ling from National Geographic Explorer teamed up for a sequel, Planet in Peril: Battle Lines, which premiered in December 2008.

Along with Martha Raddatz, he  moderated the second presidential election debate between Hillary Clinton and Donald Trump.[ This made him the first openly gay person to moderate a presidential debate in the general election. In 2017 Andy Cohen joined Cooper in succeeding Kathy Griffin as co-host of CNN’s New Year’s Eve coverage. They again co-hosted CNN’s New Year’s Eve for 2018. He has been a correspondent for the CBS News program 60 Minutes since 2007, while concurrently serving as a CNN anchor and correspondent.

Before joining CNN, Cooper was an ABC News correspondent and host of the network’s reality program The Mole. He also anchored ABC’s overnight newscast World News Now, and was a correspondent for World News Tonight as well as 20/20. He joined ABC from Channel One News, where he served as chief international correspondent. During that time, he reported and produced stories, from conflicts in Bosnia, Cambodia, Haiti, Israel, Myanmar, Russia, Rwanda, Somalia, and South Africa. Channel One News was a school television network seen daily in more than 12,000 classrooms nationwide.

In 2016, The Rainbow Comes and Goes: A Mother and Son on Life, Love, and Loss– a collection of correspondence between Anderson and his mother, Gloria Vanderbilt, debuted at the top of the New York Times Best-Sellers List and remained on the list for three months. Cooper’s first book, Dispatches from the Edge: A Memoir of Wars, Disaster, and Survival, was published in 2006 and also topped the New York Times Best-Sellers List and other bestseller charts.

He has an estimated net worth of $200 million.