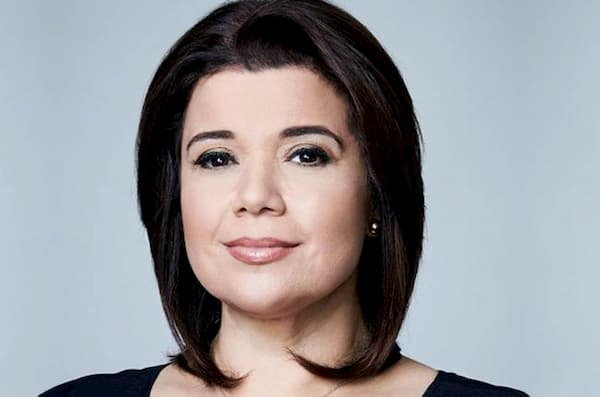 Ana Navarro (Ana Navarro Cardenas) is a media personality serving as a Republican strategist and commentator and political analyst CNN, CNN en Español, and Telemundo, and co-host of ABC’s The View.

Navarro is a Nicaraguan and American national.

Where is Ana Navarro From?

Her country of origin is Nicaragua.

She belongs to Hispanic ancestry.

Ana earned a Bachelor of Arts degree in Latin American Studies and Political Science from the University of Miami. She received a JD from the St. Thomas University School of Law in Miami Gardens, Florida.

Navarro is the daughter of Augusto Navarro and Violeta Flores Lopez. They immigrated to the U.S. in 1980 as a result of the Sandinista revolution because her father was being persecuted as an opponent of the Somoza regime. They fled to Honduras and from there to Miami. Her father was involved as a “Contra”. Anna says at her father’s side she learned to become politically involved.

“At his side, watching him, I learned to become involved politically. I grew up very sensitive to the meaning of the political system and to the crises in Latin America.”

She is the youngest of four siblings: 2 sisters and 2 brothers.

Ana is married to Al Cárdenas since March 2019. He is a Cuban-American lawyer and lobbyist. He is a partner in the law firm of Squire Patton Boggs and in the Advocacy Group at Cardenas Partners.

In October 2020, while appearing on The View Ana revealed that Al Cárdenas had contracted COVID-19 and it almost took him down.

“My husband got COVID from somebody that works in my house who had gotten it from a nephew. Sixteen people have ended up with COVID from that one person. Three of them in the hospital, including my husband, who spent five days in the hospital receiving Remdesivir.

He was at home for the first few days quarantined and isolated in our home, trying to beat it at home. When you have got somebody with COVID in your house, symptomatic, it’s like all you do all day … take his temperature, take the oxygen level, feed him, wipe everything down. Make sure he’s okay. Feed him again.

You’re trying to do all of this without exposing yourself. It is manic. It is all-consuming. And he was getting worse. So we made the decision to take him into the hospital for evaluation, and he had pneumonia, small pneumonia … he was lethargic.”

Ana was born in Nicaragua. She is passionate about her birth country and while she was a student of law at Nicaragua she helped secure the right of Nicaraguan refugees to stay in the United States. This was after the United States Congress passed a law ending the temporary residency permits for hundreds of Nicaraguans and Central Americans and declaring them “deportable.”

She formed part of “a legal and legislative effort to stop that law and find solutions to the problem.” The effort was called NACARA – The Nicaraguan Adjustment and Central American Relief Act. NACARA was approved in 1997. This helped stop deportation and a law was passed granting legal status to certain Nicaraguans and Central Americans.

Navarro is a Republican, who has served in a number of Republican administrations. She served on Florida Governor Jeb Bush’s transition team in 1998, and was his first director of immigration policy in the Executive Office of the Governor. She was the national co-chair of Senator John McCain’s Hispanic Advisory Council, and a national surrogate for McCain’s 2008 presidential campaign. She was also a national Hispanic co-chair for former Governor of Utah Jon Huntsman’s 2012 presidential campaign.

Navarro is a political commentator on CNN and CNN en Español. She joined CNN in 2012.

Ana is a weekly guest co-host on the ABC daytime talk show The View. She joined The View as a contributor in 2015 until 2016 and in 2018 she became a weekly guest. She previously served as a political commentator for ABC News.

Her salary as a political commentator and analyst is unknown.