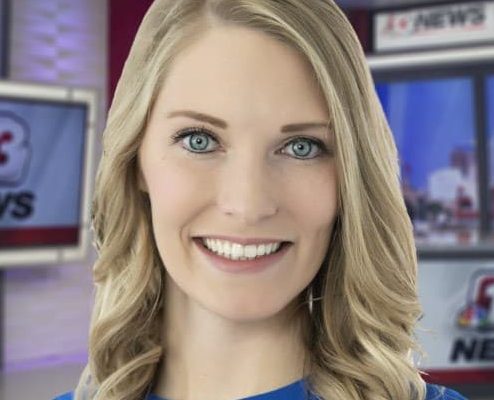 Amber Alexander is an American media personality serving as a meteorologist for WHO Tv (Channel 13). She previously worked as a reporter and meteorologist at KNOP in North Platte, Nebraska.

Alexander graduated from the University of Nebraska-Lincoln with a Bachelor’s Degree in Meteorology/Climatology.

Amber has managed to keep her family private but has said that she was born in Western Lowa. She has revealed that her father is from Nebraska.

Alexander is married to Cory Martin who is a meteorologist for NWS. The couple got married in June 2019. There is no backstory about when the couple met or how they met but they got engaged in January 2018.

I am so happy to announce that I get to marry the love of my life, Cory! Fitz even got in on the proposal too with the help of our friends, Becca and Drew! pic.twitter.com/fYylA3NXCu

Alexander is a meteorologist. She revealed during an interview with sciowa.org that she developed an interest in weather when she was 11 years, at sixth grade.

“I was 11 and in sixth grade, and we were studying the basics of weather. That caught my attention, and I thought it was so cool. We were watching the news at home that night after school, and the screen said, ‘meteorologist,’ and I thought, “Wow, that’s really neat! That’s what I want to do someday.” I’ve stuck with it ever since. I grew up a huge Husker fan, so when I went to visit the University of Nebraska-Lincoln, I thought, ‘I can’t compete with this.'”

She added that by her sophomore year of college she was practicing to be a broadcast meteorologist the green screen. At 19 years she had a small office while she was interning with the state climatologist.

Amber is a meteorologist for WHO Tv (Channel 13). She joined Channel 13 in December 2015 joining the First Alert Storm Team. She previously worked as a meteorologist and reporter at KNOP in North Platte, Nebraska.

She first joined the media as a broadcaster for UNL’s student-run newscast, Star City News. She later interned for KETV in Omaha, NE. She also served as the secretary of the American Meteorological Society, Activities Director for the Nebraska Storm Chase Team and worked as an intern at the state climate office for two years.