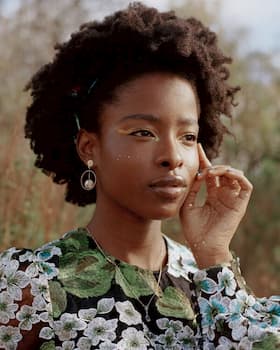 She is the founder and executive director of One Pen One Page, an organization providing free creative writing programs for underserved youth.

She graduated from Harvard University with a B.A. in Sociology.

Amanda is the daughter of Joan Wicks, teaches middle school in Watts. She was brought up by a single mom. There are no details regarding her father.

“Having a mother as a sixth-grade English teacher in an inner-city public school gave me an up-close and personal view of how literacy influences young students. I realized that education can really be a life-or-death resource. . . . School and college is a pathway to get off the streets, to break a cycle.”

She says her mother is her role model as she worked so hard to raise three kids and get her doctorate and master’s degrees in Education.

“My mother worked so hard while raising three kids to get her doctorate and master’s degrees in Education. She inspires me every day to seek higher education not only for myself, but for the other students around me.”

She has two siblings; one is her twin sister Gabrielle, who is an activist. The twins were born prematurely and their mother feared they might have physical and developmental issues because of their birth complications.

Amanda is a poet who published a poetry collection at the age of 16. Her poems focus on issues of oppression, feminism, race, and marginalization, as well as the African diaspora.

Her writing has won her invitations to the Obama White House and to perform for Lin-Manuel Miranda, Al Gore, Secretary Hillary Clinton, Malala Yousafzai, and others. Amanda has performed 4th of July and Thanksgiving poems for CBS and she has spoken to large audiences at venues across the country, from the Library of Congress to Lincoln Center.

In 2017 she was named the first-ever National Youth Poet Laureate of the United States. She had previously been named the youth poet laureate of Los Angeles in 2014. In 2017 she became the first author to be featured on XQ Institute’s Book of the Month, a monthly giveaway to share inspiring Gen Z’s favorite books. She wrote a tribute for black athletes for Nike

She has written for the New York Times newsletter The Edit and penned the manifesto for Nike’s 2020 Black History Month campaign.

Gorman is the recipient of the Poets & Writers Barnes & Noble Writers for Writers Award, and is the youngest board member of 826 National, the largest youth writing network in the United States.

Gorman has a speech impediment, she was diagnosed with an auditory processing disorder in kindergarten. She also has speech articulation issues that make it difficult for her to pronounce certain words and sounds. She has labored to perfect sounds with R being a particular challenge. During an interview, Gorman said she didn’t take her disability as a weakness but it made her the performer that she is.

“But I don’t look at my disability as a weakness. It’s made me the performer that I am and the storyteller that I strive to be. When you have to teach yourself how to say sounds, when you have to be highly concerned about pronunciation, it gives you a certain awareness of sonics, of the auditory experience.”

During an interview on CNN with Anderson Cooper she said listening on repeat to “Aaron Burr, Sir” from Lin-Manuel Miranda’s historical opus, “Hamilton” helped her practice saying letter ‘R’ as it is “packed with ‘R’s'”

In September, Gorman will release “Change Sings,” the first of two children’s books. The poet says she was driven by the desire to publish a book “in which kids could see themselves represented as change-makers in history, rather than just observers.”

Gorman was selected by the Biden Administration to read an original poem for his Presidential Inauguration on January 20, 2021, making her the youngest poet to have served in this role. She’ll be just the sixth poet to read a piece at the inauguration.

According to The Associated Press, she was contacted in December 2020 by Biden’s inaugural committee. She said it will be the first time to meet the Biden’s but it seems like they have been aware of her as the inaugural officials told her she had been recommended by the incoming first lady, Jill Biden.

Her inaugural poem is titled “The Hill We Climb”. She said she was not given specific instructions on what to write, but was encouraged to emphasize unity and hope over “denigrating anyone” or declaring “ding, dong, the witch is dead” over the departure of President Donald Trump.

Amanda Gorman The Hill We Climb

The Hill We Climb is the inaugural poem Amanda peformed during Joe Biden’s inauguration.

During an interview with Anderson Cooper on CNN she revealed her pre-inaugural poem mantra, “I am the daughter of Black writers, who are descended from Freedom Fighters, who broke the chains who changed the world. They call me.”