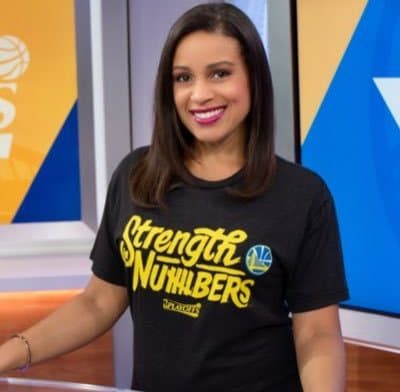 Ama Daetz is an American journalist serving as a weekday co-anchor of ABC7 News at 4 p.m., 6 p.m., 9 p.m. and 11 p.m. She previously worked as an anchor for FOX affiliate KTXL-TV based in Sacramento, California.

Ama has not revealed her actual height.

Ama is of mixed ethnicity (white and black).

Ama is an American national.

Ama graduated from Loyola Marymount University in Los Angeles, California with a Bachelor of Arts degree in Communications Studies.

Ama is the daughter of Denny Daetz. He serves as the President of The Akwaaba Foundation, a non-profit foundation dedicated to fostering world peace and sustainable international economic development through education. He is a retired teacher, who taught social studies economics, computer programming, and computer applications at Saratoga High School in California.

Ama’s biological mother is unknown her parents are divorced but her father remarried Laura Lee Daetz in January 2001. She served as a senior executive in human resources in the commercial property management industry for more than 25 years. After retiring she co-founded and served as secretary for the Akwaaba Foundation, an education nonprofit organization, and was a volunteer consultant for Acres of Hope in Auburn, California.

Laura died in December 2015 at the age of 66, in an automobile accident.

Daetz got married to John Seymour on September 12, 2012. John is a cinematographer working as a sports cinematographer at NBC Sports Bay Area & California. He has a B.A. in Communication and Media Studies from Western Michigan University.

Ama gave birth to her daughter in October 2017. She has not revealed more details about her. Her name also is unknown.

She began her career in 2001 as a writer, producer and editor for the Fox-affiliated KMPH-TV in Fresno, California. She joined the CBS-affiliated KFDA-TV in July 2002 where she worked as an anchor and reporter. She later joined WWMT-TV in Kalamazoo, Michigan anchoring radio newscasts and television and radio tease.

She joined WDIV-TV, an NBC-affiliate in 2006 as the weekend morning anchor and later began anchoring the weekend evening news program.

In 2009 she joined KTXL-TV, a Fox-affiliate in Sacramento where she worked as a reporter and was later promoted to anchor the morning show. She left the station in 2011 to join KGO-TV.

Apart from journalism, Ama has also tried a hand in acting she appeared in two episodes of The Mentalist as a reporter and on You! as Claire.

Daetz has an estimated net worth of $1.2 million.

I got to see my work family today! …from afar… masked up and socially distanced, of course.