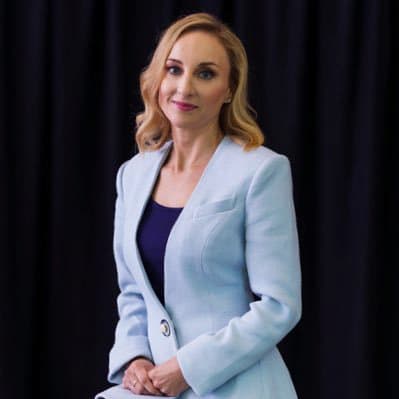 Alicia Barry is an Australian financial journalist and presenter at Australian Broadcasting Corporation (ABC News) based in Sydney Australia. She also hosts ‘The Business’ program on Thursdays providing deep analysis and insight into the events in the local and global economy.

Her actual age is unknown but she celebrates her birthday on May 8.

She graduated from Charles Sturt University with a Bachelor of Arts degree in Communications, Broadcast Journalism.

Due to her reserved character about her issues, nothing is yet revealed about her parents or siblings. Any details shall be updated here.

Alicia is married but the name of her husband is not known although she posts him on her social media account. The couple got married in November 2016.

She has a son known as Hugo born in July 2018 and a daughter born in September 2019. She is also a stepmom to her husband’s daughter from a previous relationship.

Alicia is an ABC News 24’s finance reporter and host of ‘The Business’ program on Thursdays providing deep analysis and insight into the events in the local and global economy and shining a light on the happenings in corporate Australia. She has covered business and finance news for ABC for more than five years, working across radio and television beginning at the Australia Network’s Business Today program in 2007.

She began her career in journalism while she was still a student at Charles Sturt University. She worked as a morning newsreader and bulletin producer at The National Radio News, the school’s radio station. After graduating she joined ABC as an Assistant Radio and TV Chief of Staff and was also an overnight reporter. In 2004 she joined Sky News Australia as a business journalist and producer.

She then joined ABC in 2007 as an associate producer of ‘BusinessToday’, before taking over the executive producer role in 2009. She moved through the ABC newsroom in radio, radio current affairs and as a and finance business TV reporter; before taking up prime time presenting roles in 2011.

She has an estimated net worth of around $1 million.