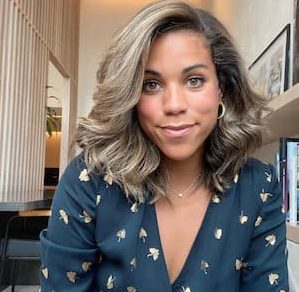 Alexi McCammond is an American media personality serving as a national political reporter at Axios, covering progressives in Congress, the progressive movement, and Vice President Kamala Harris. She is also an MSNBC and NBC News contributor.  In 2019 she was awarded the Emerging Journalist of the Year by the National Association of Black Journalists.

She was born in 1994 in Chicago, United States.

She holds a Bachelor of Arts degree in Sociology, Romance Languages and Literature from the University of Chicago.

She belongs to mixed ethnicity.

McCammond was a member of Kappa Alpha Theta and even served as an alumnae outreach chair.

Alexi is the daughter of Shelli McCammond McGinley and a journalist father, although she hasn’t revealed his name. She is the owner of the All-Stars Royal Family of Rockford, a tumbling and cheering gym. She has two siblings, Braxton and Aubyn.

She got engaged to her fiance, Matt Kuncman, in June 2020 but it seems like the engagement was called off as she is in a relationship with TJ Ducklo. She previously dated Rob Groulx, a Washington, D.C. filmmaker in 2017.

First, they were collegial and then became friends. At the time TJ was single while Alexi was in a serious relationship but things changed and in November 2020 they began dating.

TJ told PEOPLE that they both realized they felt the same way about each other and wanted to do it the right way. Alexi told her editors about the relationship in November “and asked to be taken off of the Biden beat.” She was reassigned to covering progressive lawmakers in Congress and progressives across the U.S. as well as Vice President Kamala Harris.

Alexi said, “When my personal life had the potential to interfere with my work, I didn’t think twice about sharing my happiness in November with Axios that I’d found someone in TJ who shows up for me in a way I’d only hoped for. Switching beats was an easy decision thanks to my Axios [family], who had my back in November and know just how lovely it is to find someone who cares deeply about you.”

She added that she knew their relationship would cause a lot of criticism but they wouldn’t let that come between their happiness.

“TJ and I knew full well the unfair criticism our relationship might face, but knew that we weren’t going to let bullies get in the way of our own happiness.”

McCammond is a national political reporter for the political website Axios. She covers progressives in Congress, the progressive movement, and Vice President Kamala Harris. She previously covered Joe Biden’s presidential campaign in 2019 and 2020. She is also an NBC/MSNBC contributor. She has also appeared on Fox Business, WJLA, WNYC, among others.

She previously for Bustle, the leading website for millennial women. While there, she grew the site’s news and politics vertical, focusing on everything from reproductive rights to labor market trends to executive orders. Alexi reported from the DNC, the presidential debates, and President Trump’s inauguration for Bustle, filing stories and curating videos through the website’s Instagram.

Prior to joining Bustle, she covered Marco Rubio’s campaign during the New Hampshire primary for the Sarasota Tribune. She began her career as a freelance political writer for Cosmopolitan.

Her actual salary as an Axios reporter is unknown.

In November 2019 Alexi said that Charles Barkley, Turner Sports commentator and N.B.A. Hall of Famer, threatened to hit her after she questioned his apparent political indecisiveness as they discussed the 2020 Democratic presidential hopefuls.

Alexi tweeted; “Just FYI Charles Barkley told me tonight ‘I don’t hit women but if I did I would hit you,’ and then when I objected to that he told me I ‘couldn’t take a joke.’”

According to her tweets, Alexi said that Barkley had spoken at the bar about how much he loved Deval Patrick, the former governor of Massachusetts who recently entered the presidential race. After an official from the campaign of Pete Buttigieg, a Democratic candidate and mayor of South Bend, Ind., approached, Barkley said how much he loved Buttigieg. When McCammond reminded him of what he’d said earlier about Patrick, Barkley made the threatening comment.

Barkley apologized in a statement Turner Sports released on his behalf, “My comment was inappropriate and unacceptable. It was an attempted joke that wasn’t funny at all. There’s no excuse for it and I apologize.”

Statement on behalf of Charles Barkley in response to tweet by Axios reporter Alexi McCammond:

“My comment was inappropriate and unacceptable. It was an attempted joke that wasn’t funny at all. There’s no excuse for it and I apologize.”

After the tweet Alexi tweeted: “The comments Charles Barkley made to me are not acceptable. Threats of violence are not a joke, & no person deserves to be hit or threatened like that. Silence only allows the culture of misogyny to fester.”