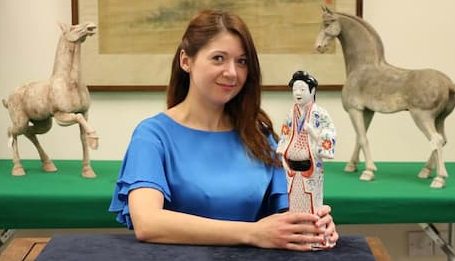 Alexandra Aguilar Domeracki is an antique expert and television personality. She is a French auctioneer and Asian art specialist at Woolley & Wallis Salisbury Salerooms. She also serves as a specialist on BBC’s Antiques Roadshow.

Aguilar is a French national, she is originally from Dijon in France.

Aguilar has not revealed her marital status.

Alexandra is an auctioneer, cataloguer and valuer at Woolley & Wallis Salisbury Salerooms Ltd. He roles involve sourcing Japanese works of art, valuing and cataloguing them for the biannual Asian Art sales. She also conduct sales for the various fine art departments at Woolley & Wallis. She previously served as the assistant to the Asian Art, European Ceramics and 20th c. Design Departments.

Prior to joining the auction world she served as a sales assistant at The University of Oxford Shop, Freelance editor for Add’Verb Publishing Agency. She also served as a volunteer research assistant at Edinburgh Central Library and a French Tutor at The Open University.

Aguilar is a specialist on BBC’S Antiques Roadshow. She is a ceramics and glass expert and specifically specialises in netsuke – miniature sculptures which originated in 17th century Japan. She joined the show in 2018.

She has said that her dream find “ould be a Kakiemon porcelain elephant, models made in the late 17th c. by artists who would have never seen a real elephant. The models would have been based on prints and because of this, they look like fantastic creatures. I would love to see one on the Roadshow.”