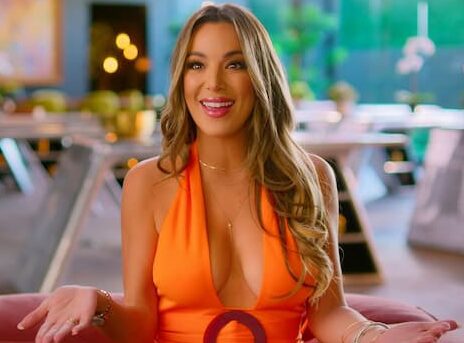 Alex Hall is an American licensed realtor who serves as a realtor associate at The Oppenheim Group. She has a background in interior design. She also stars on Netflix’s real estate show Selling The OC, Selling Sunset’s spin-off series.

Alexandra is 32 years old. She was born in Laguna Beach, California where she also resides.

Alex is estimated to stand at a height of 5 feet 5 inches tall.

Hall has not talked much about her parents nor does she share that part of her life on social media, but a little research has shown that she mentioned her mother’s name is Kathy Hall.

Alex has not talked about her ethnicity but she was born in California. She is however not of Asian descent as many has speculated. Her ex-husband was of Mexican origin.

Alex was married for seven years to Neil Flores. Neil is a California-based attorney of Mexican ethnicity. He was admitted to the state bar of California in March 2020. He specializes in workers compensation and international law. He has also worked as a realtor but has since focused on law.

The former couple first met in Orange County and got married in 2008 but Alex filed for a divorce in November 2015 at Orange County Superior Courts, at the Lamoreaux Justice Center located in Orange, California.

Hall and her ex husband have two children together a daughter known as Gia and a son whose name is unknown.

According to People she had originally declined to be on ‘Selling The OC’ but later agreed after she found out a producer from one of her favorite shows, Laguna Beach, was going to be a part of it. She spoke to Jason Oppenheim on the phone for two hours and he convinced her to sign on. “He basically told me I’d be stupid not to do it!”

She added that when the Oppenheim brothers moved into their Corona del Mar office in Newport Beach they recruited an unnamed agent with whom she had previously worked, and Hall says she was “intrigued.” So when she got in touch with the brothers about a job, she also received a call from the show’s producers.

“It seemed like every direction I looked was pointing me toward the Oppenheim Group. And then I spoke to Jason for about two hours before we ever met in person, and we just really, really, really hit it off. That, in conjunction with the show, it was a no-brainer [to join the team and the cast].”

Alex is not a cast member of Selling Sunset but it’s spin off Selling The OC, which featured The Oppenheim Group expanding to Orange County, where an all-new real estate team shows off lavish oceanfront listings and big personalities make waves.

Hall has not been in any other show, Selling The OC is her first show.

Hall’s net worth is estimated to be around $5 million thanks to her ten-year real estate business.