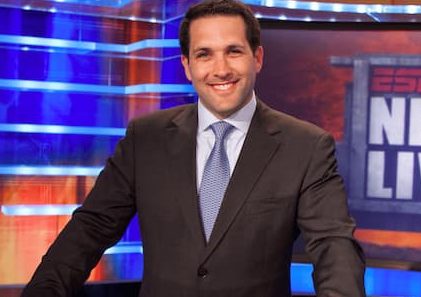 Adam Schefter is an American sportswriter and television analyst serving as a senior NFL insider at ESPN and hosts his own ESPN Audio podcast, “The Adam Schefter Podcast.” He appears on NFL Live, Sunday NFL Countdown, Monday Night Countdown, SportsCenter among others. He is also a regular contributor to other ESPN platforms, such as ESPN.com and ESPN Radio.

Adam stands at a height of 5 feet 8 inches tall.

Schefter graduated from the University of Michigan with a degree in Political Science and later earned his master’s degree at Northwestern University’s Medill School of Journalism.

Adam is married to Sharri Maio since 2007. The couple met in 2006 on a blind date. She suffers from Type 1 diabetes. When recalling their first meeting, he says he felt an immediate connection.

“There was, I believe, an instant chemistry because shortly after we began dating, Sharri started wearing her (insulin) pump, which she was always apprehensive about wearing. I think we were comfortable enough with each other that she basically knew it was the best and right thing to do. Now she’s had that pump on as long as we have been together, which is over 12 years.”

Sharri was previously married to Joe Mario who died during the September 11, 2001, attacks in New York City. He was one of 2,606 people who died in the World Trade Center and the surrounding area that fateful day. He used to work on the 105th floor of the North Tower.

Sharri developed gestational diabetes while pregnant with her first child and a year after the passing of her then-husband, Joe she was diagnosed with adult-onset Type 1 diabetes.

Adam is a father of two a son known as Devon (born in June 2000) and a daughter, Dylan (born in October 2008). Devon is Sharri’s son from her first marriage.

Prior to marrying Sharri Maio, Adam was married but it ended with a divorce. There is no available information available about the marriage.

Adam joined ESPN in August 2009 where he serves as a Senior NFL Insider. He appears on a variety of programs, including NFL Live, Sunday NFL Countdown, Monday Night Countdown, SportsCenter among others. He also contributes to other ESPN platforms, such as ESPN.com and ESPN Radio.

He was part of ESPN’s telecast team for a 2017 NFL Wild Card game, he did an extensive NFL training camp tour with Chris Mortensen in 2010, and he has done other features for Countdown, including a personal story about his family’s connection to the September 11, 2001 terror attacks.

In 2017 he joined the NBA on ESPN team as a sideline reporter. This was part of his new contract with ESPN, to work select NBA games including NBA Playoff.

Prior to joining ESPN, Adam worked as an NFL reporter and analyst for NFL Network (2004 – 2009). He appeared on NFL Total Access and also wrote for NFL.com. He previously served as a sportswriter for more than 15 years for the Denver Post and the Rocky Mountain News, where he covered the NFL and the Denver Broncos. During his time with Denver Post, he appeared on ESPN’s Around the Horn and the Sports Reporters.

He began his newspaper career at The Michigan Daily as an editor. While at Northwestern University he worked as a freelance reporter for the Chicago Tribune. After graduating he joined the Seattle Post-Intelligencer as an intern. He later moved to Denver in 1990, where he started writing for the Rocky Mountain News.

Adam hosts Adam Schefter Podcast since February 2017 on ESPN Audio. The podcast features long-form conversations with newsmakers who have a connection to football.