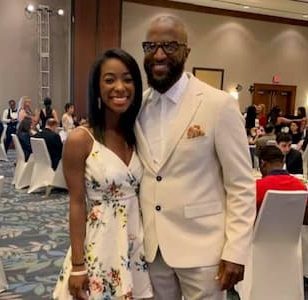 Aaryn Smiley is the youngest daughter of Rickey Smiley, American stand-up comedian, television host, actor, and radio personality, known for his prank phone calls. She was shot three times in Houston while getting food at a Whataburger.

Aaryn is the daughter of Rickey Smiley who is an American stand-up comedian, television host, actor, and radio personality, known for his prank phone calls. He hosts his radio show, Rickey and can be seen on Dish Nation. He’s the star of his own sitcom (The Rickey Smiley Show) and reality TV series (Rickey Smiley For Real), both on TV One. Since early 2020 he began hosting the Rickey Smiley Show replacing the Tom Joyner Morning Show

My daughter Aaryn and her mom!! Slaying they asses in the DF Dub!!!!! #DFW pic.twitter.com/BjXhBebO38

On July 6, 2020 during an episode of the Rickey Smiley Morning Show, Rickey said that his daughter was shot last night. This was after violence erupted across America during the Fourth of July weekend as numerous shootings were reported in Atlanta, Cleveland, Chicago, Alabama, South Carolina, and Maryland/Washington D.C.

He said; “My youngest daughter was shot last night. Aaryn, she in the hospital right now.” He added that she was doing alright and was awaiting surgery at a Houston hospital.

He said she was getting food at the time of the incident at a Whataburger. “That’s why I can’t have focus — I’m just so angry right now. … I’m trying to focus, trying to do the show, trying to figure out – because there aren’t hardly any flights, because of COVID. I’m [going to] have to fly to Dallas and then drive down to Houston.”

He added; “All the stuff these people trying to do to fight for the rights of Black people. This is no discredit to Black Lives Matter because I believe that and I’m with that movement 110% and one has nothing to do with the other, but there are some criminals in our community that someone needs to do something about.”

Referring to the shooting killings of 8-year-old Royta Giles Jr. in Birmingham this past Friday and 8-year-old Secoriea Turner in Atlanta Saturday, Smiley said, “I get the luxury of going to the hospital, even if they don’t let me upstairs to see her, I get to wait in the lobby. I get to text and talk to my daughter…Just think about all the parents, forget me, think about all the parents that got to go pick out a casket this morning.”

“I just pray I’m sitting up here a gunshot victim myself and I’m still up here fighting and praying for the rights of Black people and all of the parents that had to bury their loved ones due to gun violence in our own community by our own people. Absolutely disgusting”

This morning, @RickeySmileyOfficial opened up about his daughter #AarynSmiley getting shot in #Houston over the holiday weekend. The audio is posted at rickeysmileymorningshow.com (link in bio). Please continue to keep Aaryn, Rickey and the Smiley family in your prayers ?

A post shared by Rickey Smiley Morning Show (@rickeysmileymorningshow) on Jul 6, 2020 at 8:39am PDT