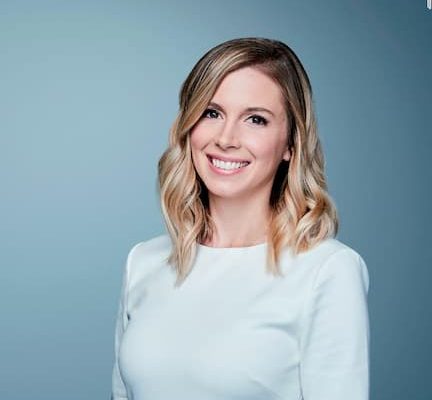 Whitney Wild is an American media personality serving as a CNN law enforcement correspondent based in Washington, DC. She is a former correspondent for CNN Newsource. Prior to joining CNN, she was a special assignment unit reporter for WUSA-TV.

Wild has a Bachelor of Arts degree in Comparative Literature from the University of Michigan. She earned a Master of Science degree in Journalism from Northwestern University’s Medill School of Journalism.

She is the daughter of Terri Wild and has a brother known as Trevor Wild. She has not revealed the name of her father.

Mom and dad with the Wild family flag as we start the 2016 Black Lake Olympics! Also, my dad thinks this is a called a “selfie.”

Whitney is married although the name of her husband is unknown.

She is a mother of three, a daughter known as Audrey and sons Philip born in 2018 and Paul Steven born in August 2020.

She revealed that she couldn’t nurse her daughter effectively and she felt guilty about that. She said she was determined to breastfeed her son but when he was three weeks old he started crying seemingly non-stop.

“It felt like he was either eating, sleeping, or screaming. He hardly ever seemed satisfied and even when he was full, he was fussy. Between the stress and the sleep deprivation, I lost my grip on my emotions. I sobbed for no reason and screamed at my husband for the smallest infractions.

The low point came on a cloudy winter day when I looked over at my crying baby lying on the couch. I knew he needed a diaper change. I couldn’t gather the strength to help him. I couldn’t even convince myself to hold him. Anger had edged out my compassion for my only son. It was an irrational reaction that terrified me. That was the moment I realized breastfeeding had wedged itself between me and my child. That was the day that I stopped.”

Whitney is a CNN law enforcement correspondent based in Washington, DC where she covers law enforcement agencies, including the Capitol Police and Secret Service. She joined CNN in July 2019 as a correspondent for CNN Newsource. She delivered live reports and digital content for Newsource’s 1,000+ local news partners.

Whitney served as a general assignment reporter at 9News – WUSA. She joined the station in March 2014. She earned a National Capital Chesapeake Bay Chapter Emmy Award for her reporting on discriminatory property advertising and rental practices affecting federally subsidized housing voucher holders. Following her reporting, lawmakers in the nation’s capital expanded efforts to combat housing discrimination based on the source of income.

In June 2013 she was named the Chesapeake Associated Press Broadcasters Association winner for Outstanding TV Multimedia Journalism for a compilation of day-turn stories.

Her actual salary is unknown but her annual base salary is estimated to be $100,000.

She has an estimated net worth of 3 million.

Happy and honored to be back at the @whitehouse since 2011, when I was a grad student @northwesternu @medillschool!