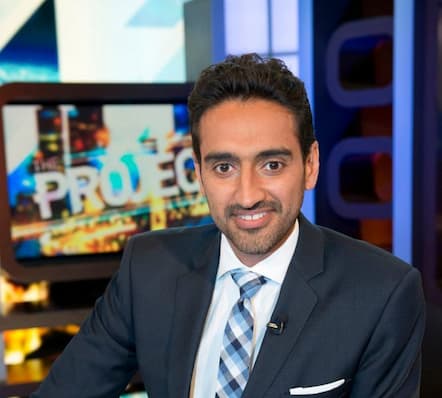 Waleed Aly is the co-host of Network Ten’s news and current affairs television show The Project . He also co-hosts The Minefield, an ABC RN program exploring ethical challenges in modern life. He is a lecturer in politics at Monash University’s Global Terrorism Research Center. He is a writer, academic, lawyer, and broadcaster from Australia.

He is a beloved son to Moneim Aly(father) and Salwa Aly( mother), who emigrated from Egypt. They met and married in Melbourne. His father died in Egypt in 2014. His parents had established themselves in Australia, though it wasn’t where they grew up.

He has one brother Ahmad Aly, 46, who is a gastrointestinal surgeon at Austin Hospital in Melbourne.

He is happily married to Australian feminist author and academic Susan Carland. Aly and Carland tied the knot in an Islamic ceremony on the lawns of Melbourne Zoo back in 2002. Susan was in an ice-blue gown with matching while Waleed had an oversized jacket.

He is an excellent father to two beautiful children Aisha Aisha Aly (20) and son Zayd Aly (15). Zayd was diagnosed with autism. Aly has explained how both kids have shown exceptional talent.   Zayd ‘teaching himself German’ and Aisha asking her parents what they should ‘do their PhD’s on’. Zayd has great passion in sports.

Aly is the co-host of The Minefield with religion and ethics critic Scott Stephens . He is also an expert studio guest each week as of 2021, as well as his work on The Project. He’s been a panelist on ABC TV’s Q&A program and a guest co-host on ABC’s News Breakfast on occasion.  Aly quit as the anchor of ABC Radio National (RN) Drive in December 2014 to take over as the permanent co-host of Channel Ten’s The Project on January 26, 2015.
In April 2015, he returned to ABC RN to co-host The Minefield, in addition to his job on Channel Ten’s The Project. Aly was frequently interviewed on current affairs and news programs. This was during his position as the Islamic Council of Victoria’s head of public affairs and a member of its executive committee. The Guardian, The Australian, The Australian Financial Review, The Sydney Morning Herald, and The Age have all published his social and political comments.

Furthermore, he is a fortnightly columnist for Fairfax Media at the moment. Aly reminded readers of the Quranic text, Do not allow the injustice of others lure you into injustice, when researching the motives for the suicide attacks in central London on July 7, 2005. Aly was the host of ABC News 24 and ABC1’s Big Ideas show.

Additionally, he was a regular panel member and producer on Salam Cafe. This is  a weekly program presented by young members of Melbourne’s Muslim community and produced by RMITV first for C31 Melbourne and later for SBS. He as well is a regular guest co-host on The Conversation Hourwith Jon Faine on 774 ABC Melbourne and The Project on Channel 10.

In the aftermath of the November 2015 Paris attacks, Aly criticized the extremist group Islamic State of Iraq and the Levant.  In a four-minute monologue titled “What ISIL wants” on The Project, calling them “bastards” he urged no one to fear them because “they are weak.” Aly and producer Tom Whitty wrote the video, which was put online and gained 13 million views in less than a day.

Aly is the lead guitarist and primary songwriter for Robot Child, a Melbourne-based rock band. The band performed at the Famous Spiegeltent for the release of the Jesuit Social Services’ Just Music album, contributing a track to it. At the 2015 Walkley Awards, they were commended for their cover of Pink Floyd’s “Comfortably Numb.” He is also a featured performer on Paul Kelly’s Christmas Train CD “Surah Maryam,” which will be released in 2021.

Notably, he got the Gold Logie Award for Best Television Personality in Australia in 2016.

He has garnered an estimated networth of $10-18 million .