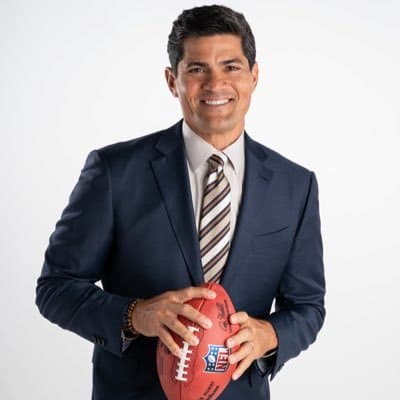 Tedy Bruschi is a former professional American football linebacker who played 13 seasons in the National Football League (NFL). He is now the senior advisor to the head coach at the University of Arizona and ESPN analyst.

He lettered in high school football, wrestling, and track and field at Roseville High School in Roseville, California(shot put). As a defensive tackle for the Roseville Tigers, he was named to the all-conference team. From 1991 to 1995, Bruschi was a member of the University of Arizona’s football team, the Arizona Wildcats.

He finished his four-year college career with 185 total tackles (137 solos), 74 tackles for loss, six fumbles and five recoveries, and 52 sacks, tying the NCAA Division I-A sack record. In 1994 and 1995, he was named to the consensus first-team All-American team and won the Morris Trophy as the top defensive lineman in the Pacific-10 Conference.

He was born to a Filipino mother while his paternal grandparents are from Bedonia, Italy (particularly, the frazione ofBruschi di Sopra).

He has been happily married to his university lover Heidi Bomberger Bruschi. The duo wedded in 1997.

He is a loving father of three boys, TJ, Rex and Dante.

Bruschi joined ESPN as an NFL commentator in August 2009, one week after announcing his retirement from professional football. The former New England Patriots linebacker contributes to ESPN’s yearly coverage of Super Bowl week. He also can be seen in the NFL Draft by providing insight on Sunday NFL Countdown, Get Up, First Take, SportsCenter, and ESPN Radio. Bruschi joined the Monday Night Countdown crew at both Patriots Monday Night Football games in his first season with ESPN.

He was a two-time consensus All-American in college football for the University of Arizona. He was picked in the third round of the 1996 NFL Draft by the New England Patriots, and he spent his whole professional career with them. Bruschi was a three-time Super Bowl champion and a two-time All-Pro.

Moreover, he was honored on the field as the Patriots’ 50th Anniversary Team’s honorary defensive captain. In December 2010, Kraft and the Patriots honored Bruschi with a special ceremony at halftime of the Patriots’ ESPN MNF game against the division rival Jets. He was enshrined into the Patriots Hall of Fame three years later. Bruschi appeared in five Super Bowls with the Patriots and 189 regular-season games in his career.He is the only player in NFL history to return four interceptions for touchdowns in the same season.

Bruschi underwent months of therapy after his first stroke in February 2005 (he recovered from a second stroke, known as a TIA, in July 2019). Later, he was medically cleared to play football and returned to the lineup in October. He won the Ed Block Courage Award and the Maxwell Football Club’s Spirit Award in 2005, and was voted the NFL Comeback Player of the Year.

Bruschi documented his own experience in the biography Never Give Up: My Stroke, My Recovery, and My Return to the NFL, which he published in 2007. Bruschi, a representative for the American Heart Association and the founder of Tedy’s Team, an organization that raises donations for stroke research, is one of the Patriots’ most active players in the broader Boston community.

He earns a salary of approximately $ 1 million annually

His networth is approximately 12 million dollars