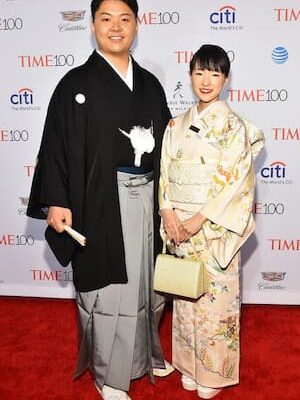 Takumi Kawahara is the co-founder and CEO, KonMari Media, Inc. and the husband of tidying expert, Marie Kondo. He is also an executive producer of Netflix’s hit show, “Tidying Up With Marie Kondo.”

He graduated from Kanagawa university with a degree from the department of autonomous administration, faculty of law.

Kawahara married his wife Marie Kondo in 2013. In a blog post, Marie revealed that Kawahara didn’t have and couldn’t afford a ring so Marie gave him her grandmother’s engagement to give to her. Marie had been given the ring after her grandmother passed away.

“When Takumi, my husband, proposed to me, he didn’t have the money to buy me a ring. I told him ‘I don’t need a ring! You can give me this ring instead.’ Her ring is the one he gave to me when he proposed.”

The couple first met while they were waiting for an elevator at a speaking event in Tokyo. At the time they were both 21 years old and Marie was a college student. Marie’s attention was caught on the suit that he was wearing which had a little badge on it featuring the Japanese symbol for the word dream. “When I saw that, I thought, What a passionate person!”

The two ended up talking and Marie gave him one of her business cards to keep in touch. They became close, and after Kondo’s bestselling book The Life-Changing Magic of Tidying Up had been released in Japan in 2010, they incorporated their passions for business and organization together to share Kondo’s message of “sparking joy” through tidying with the world.

Takumi and his wife Marie Kondo have three children together; two daughters, Satsuki and Miko, and a son born in April 2021.

Kawahara is a co-founder and CEO of KonMari Media, Inc. alongside Marie Kondo. KonMari is a lifestyle brand founded by Marie Kondo. Marie introduced the KonMari Method™ in her best-selling book, “The Life-Changing Magic of Tidying Up.”  Her approach to tidying is rooted in a single question: Does this item spark joy? Identifying what sparks joy leads to a home filled only with items you cherish. It’s also a path to self-discovery, mindful living and fulfillment. The goal of the company is to help more people choose joy and complete their tidying adventures.

He is also an executive producer of Netflix’s hit show, “Tidying Up With Marie Kondo,” and oversees product development for the KonMari brand. He began his career as a corporate HR consultant and strategist for Achievement Co., Ltd. in Tokyo

Kawahara is the executive producer of Netflix series “Tidying Up with Marie Kondo” and “Sparking Joy with Marie Kondo”. The shows help people declutter their homes and pinpoint which objects “spark joy” in order to determine what to keep and what to purge.

Takumi currently resides in Los Angeles with his wife and their three kids.

His actual net worth is unknown but his wife has an estimated net worth of $8 million.