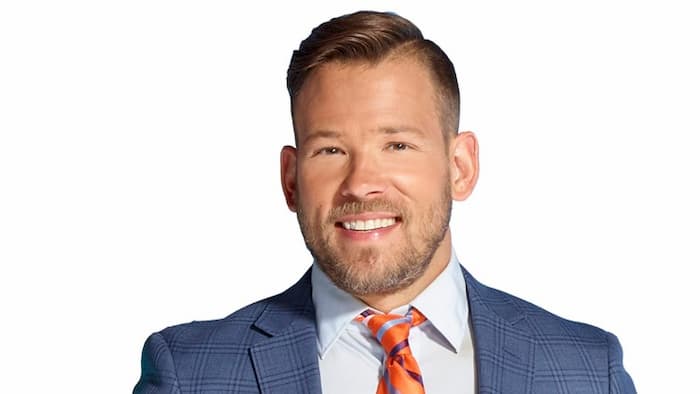 Sven stands at a height of 5 feet 5 inches tall.

Sven graduated from St. Cloud State University in weather forecast and meteorology in 2002. He has an American Meteorological Society’s Seal of Approval.

Sven is not married but is in a relationship with Robert McEachren.In February 2017 Sven posted on his Facebook page a photo of themselves kissing as they celebrated their fourth anniversary. He captioned the photo; “Today marks the first time Robert & I met, what was supposed to be a weekend turned into two weeks, and now four years! Love you dodi… !”

On May 1, 2020, KARE 11 announced that they had fired Sven after violating ‘KARE11’s news ethics and other policies’. They posted on their Facebook account;

“Due to continued violations of KARE11’s news ethics and other policies, we have made the decision to part ways with Sven Sundgaard.

We hope you continue to turn to KARE 11 for your news, traffic, weather and more.”

Why was Sven Sundgaard Fired

It is not clear why Sven was fired but the station alleged that he had violated the station’s ‘news ethics and other policies’.  In April he had however reposted a comment from Minneapolis Rabbi Michael Adam Latz comparing those protesting the recent economic shutdowns to “white nationalist Nazi sympathizer gun fetishist miscreants.”

On April 19, 2020 Sven reposted a post by Rabbi Michael Adam Latz on his Facebook page calling protestors who was demanding to reopen the state ASAP “White nationalist Nazi sympathizer gun fetishist miscreants.” The post further warned “Armed extremists” should not be taken lightly. The protestors had gathered outside Tim Walz’s executive mansion on April 17 to protest the Governor’s shutdown orders to shut down the state’s economy.

Sven has since deleted the post but here is a screenshot.

#EARTHDAY2020 Finally… Last but not least. There are #humans working tirelessly around the world offering hope. From the infamous #JaneGoodall to Jeff Muntifering saving rhinos, Julian Fennessy with Giraffe, Joel Satore (of @NatGeo ) & his #PhotoArk bringing awareness to our variety of species. Patricia Valdespino works with #monarchs in #Mexico , Hilde Falun-Strom & Sunniva Sorby have been living isolated in the #Svalbard for 9 months bringing awareness to #ClimateChange in the #Arctic. These are all people I’ve been so lucky to meet & learn from & be inspired by. I will leave you after this post with #JaneGoodall ‘s ‘5 reasons for Hope.’ (In my stories above ?) – We change course & save the planet… ALSO: check my stories ? where I’ll post some shorts of some of my favorite scenic #ecosystems. @heartsintheice #EarthDay