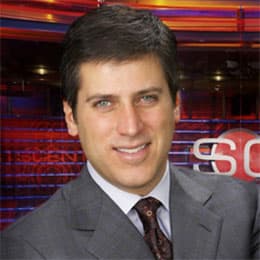 Steve Levy is an ESPN sportscaster and writer in the United States. He is well-known for his work as a college football, Monday Night Football, and NHL broadcaster.

Levy attended John F. Kennedy High School in Bellmore, New York, before earning a bachelor’s degree in communications and television from the State University of New York at Oswego in 1987.

He has not released any details about his parents to the public.

Steve is happily married to his lovely wife Ani Levy. The duo got married in 2009 in a private wedding ceremony attended by close friends and family. Ani Levy, Steve’s wife, and Caritas Christi’s Deputy General Counsel is an attorney. She graduated from law school in 2001.

He is a loving father of three children; Carson and Stone, twin sons, and Harper, a female.

Levy joined ESPN in August 1993 and quickly rose to become one of the network’s top play-by-play commentators, covering college football, the NFL, the NHL, and the XFL. He is well-known in the studio for anchoring SportsCenter for most of his career. Monday Night Football’s play-by-play announcer is Steve Levy, one of ESPN’s most recognizable voices. He became the seventh play-by-play announcer in the 51-year history of the top club when he took over the post in August 2020.

Additionally, Steve is also the head of ESPN’s NHL studio staff and contributes to game play-by-play. With Brian Griese and Louis Riddick, Levy called the season-opening Denver Broncos vs. Oakland Raiders game on Monday Night Football for the first time in 2019. From 2016 to 2019, he worked with Griese and Todd McShay to call weekly ESPN and ABC college football games. Levy also contributed to the Field Pass presentation of the National Championship game “MegaCast” on ESPN2 (2016-19). He was involved in the College Football national semifinal for ESPN Radio (2017-19), and the New Year’s Six bowl games (2016-19).

Along with that, Levy has the honor of calling the longest-running NHL Stanley Cup Playoff game in history. It was called the five-overtime Eastern Conference Semifinals between Pittsburgh and Philadelphia (May 2000) on ESPN. He has called three of the four longest televised Stanley Cup Playoff games. These include the five-overtime Western Conference Semifinals between Anaheim and Dallas (April 2003) on ESPN and the four-overtime first round between Pittsburgh and Washington (April 1996) on ESPN2.  Since 2010, Levy has hosted the US Hockey Hall of Fame Induction Celebration every year.

Moreover, he and Melrose were co-owners of the Adirondack Frostbite of the United Hockey League for two years. Beginning in 1999, when he played himself in the hockey-themed Mystery, Alaska, Levy has appeared in eight films. Fever Pitch, The Ringer, The Game Plan, Tooth Fairy, Parental Guidance, Grudge Match, and most recently Million Dollar Arm are among his other credits.

His salary is estimated at $2 Million annually.

He has garnered a networth of approximately $7 Million