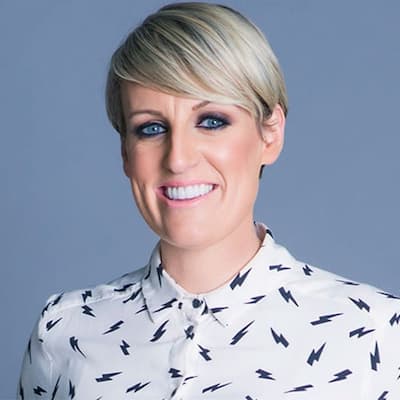 Stephanie Rose McGovern is a British media personality working as a presenter for Channel 4. She  hosts Steph’s Packed Lunch and also presents a new six-part BBC daytime series called Made in Great Britain. She previously worked for the BBC as the main business presenter for BBC Breakfast and also presented BBC Radio 5 Live’s Wake Up to Money.

She  attended Kader Primary School before joining University College London, where she studied Science Communication and Policy in the Department of Science and Technology Studies. In 2013  Steph  was awarded an Honorary Doctorate by Teesside University.

Steph is the daughter of Eamonn  McGovern  a professional artist. She  revealed that every Christmas her talented dad paints her a Christmas card. Sharing a photo of the year’s incredible creation, she told her followers that the piece captured a Middlesbrough landmark that she’s walked to many times in the past.

Taking to Twitter,she wrote: “Every year my dad paints me a Christmas card… he’s just finished this year’s. It’s the walk up to Acklam Hall through the Avenue of Trees (Middlesbrough), a path I’ve walked many times. #prouddaughter #home @emcgovernart.” She hasn’t revealed any information about her mother.

Steph hasn’t revealed any information regarding her siblings.

McGovern is a Lesbian but she hasn’t revealed the name of her partner. On why she keeps her private life away from the limelight, Steph revealed she is trying to live a normal life as possible under the circumstances. “It’s not like I’m ashamed of anything in my life,” she explained. “It’s more a case of I’m trying to lead as normal a life as I can.   “I just think that the less I talk about my private life, the less I can be asked about it.”While her girlfriend’s name hasn’t been revealed, it has previously been reported that she works as a TV executive.

On November 8, 2019 Steph revealed she had given birth to a baby girl. She tweeted: “Well hello world, just surfaced to let you know that we now have a daughter! We’re all fine and dandy. Just getting used to the eau de sick/poo I am now regularly wearing. #babylife”. She revealed her pregnancy in a light-hearted Twitter post with a caption, “I see my news is out! Yep, I am no longer with pot belly…… I am now with child. #babyonboard,”

McGovern started at the BBC doing work experience on the Tomorrow’s World programme, before securing part-time employment as a researcher in current affairs. She went on to be the main producer for daily financial news on the Today programme on Radio 4, before becoming the lead producer of business news on the BBC’s One, Six and Ten O’Clock news bulletins, working with the then business editor, Robert Peston.

She  presented BBC Radio 5 Live’s Wake Up to Money and On the Money and was BBC Breakfast’s main business presenter beginning in 2010, as well as a regular presenter of the entire showCBBC.Since March 2016, she has co-presented the consumer series Shop Well for Less with Alex Jones for BBC One.

McGovern joined the BBC Watchdog presenting team from autumn 2016. She also co-presented Can Britain Have a Pay Rise? for BBC Two alongside James O’Brien and has been both a panellist and host on Have I Got News for You.She left BBC Breakfast in October 2019 to join Channel 4. She had been expected to host Steph’s Talks from spring 2020 at Channel 4’s then-new base in Leeds, however the COVID-19 pandemic meant that she began presenting The Steph Show from her front room on 30 March 2020. The show eventually launched in September 2020 as Steph’s Packed Lunch.

Steph has an estimated  net worth of $4million-$5million.