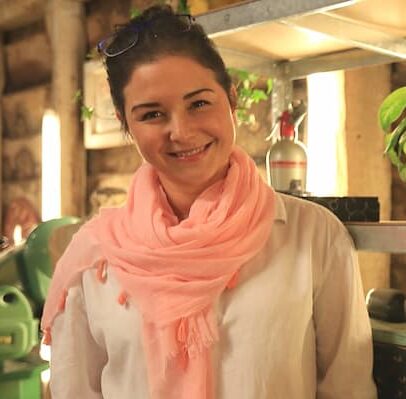 Sonnaz Nooranvary is a British-Iranian upholsterer based in Dorset. She is a regular expert on BBC’s The Repair Shop, specializing in exquisite upholstery, Soft furnishings & interiors and Residential & Yachts.

She began her career with an apprenticeship in upholstery at Sunseeker Yachts, but quickly expanded from yachts to other forms of upholstery, before setting up her business SONNAZ in 2011, where she employs a small team of dedicated makers.

Her actual age is unknown but she is believed to be in her mid 30’s.

She is a British-Iranian.

Sonnaz was studying Law but she dropped out of the university and took on an apprenticeship in upholstery at Sunseeker yachts. She later joined Barton Peveril Sixth Form College where she studied fine and studio arts. She later joined Marine Skills Centre Poole where she gained skills in NQV, Upholstery and design, Boat building, engineering and support services.

She has managed to keep her personal life very private, there is no information regarding whether she is married or not.

Nooranvary is the founder of Sonnaz Ltd which she founded in 2011. According to their website, the company aims “to bring fabulousness and craftsmanship into every space we possibly can. Reupholstery and restoration will always be areas we remain deeply passionate about. For those who commission either of these services, the craftsmanship that goes into all aspects ultimately prevents treasured items ending their usefulness in landfill. They live on to tell stories about their current owners, past generations, long-lost families and all manner of historical backdrops.”

Sonnaz is one of the experts on BBC’s The Repair Shop. She joined the show in March 2017 as an upholstery expert. She specializes in exquisite upholstery, Soft furnishings & interiors and Residential & Yachts. She has a particular passion for boats which she developed at a young age as she is believed to have lived on an Iranian Navy merchant ship as a baby.

Sonnaz and Will Kirk are both experts on The Repair Show. The two were given the task of restoring King George’s coronation chair. They were given creative freedom but decided to keep the commemoration chair as close to the original as possible.

While doing an interview with RadioTimes.com Sonnaz defended the decision saying the chair held much history for the owners.

“On the back of the chair there is embroidery of the crest, and I didn’t want to get rid of that. And also the way that Andy and Anna were talking about the chair and the arrival and the memories and how they remember it, and what they wanted to do with the chair moving forward – they didn’t want it to be a piece that was going to be used every day – my gut kind of told me that the historical relevance, how they remembered it and this embroidery really needed to stay looking the same.”

She added: “Because of the historic relevance and the importance of the chair, I actually carried out more of a conservation on this chair as opposed to a reupholstery. I just had a gut feeling that the owners much more appreciated the chair looking how they remember it.

So this particular chair, I gave the surface of the original velvet fabric – which had faded quite badly – a really gentle clean, not with water, so a dry clean, and I reinforced it onto a lining fabric. All the padding underneath, I replaced the webbing, but I reused the original horsehair pad. I just added more hessian and using traditional methods, so I use a tack hammer, as opposed to a staple gun. I brought it all back up to life again!”