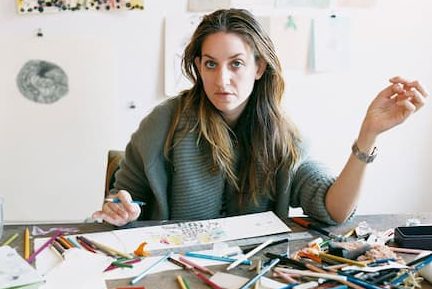 Simone Margaret Shubuck is an American self-taught florist and artist who works on paper almost exclusively. She is also a contributor to publications such as The New York Times Style Magazine blog. She is the wife of Adam Rapoport, former editor-in-chief of Bon Appetit.

She belongs to white ethnicity.

She received her BFA from the San Francisco Art institute in 1993.

She is the daughter of John and Linda Shubuck. She has a sister although her name is unknown. They were born in Pennsylvania but the family now lives in New York.

Shubuck is a self-taught florist and artist devoted to drawing and works on paper almost exclusively. She began her career as a florist arranging flowers for Babbo Ristorante in New York’s West Village.

As an artist, she is devoted to drawing and works on paper almost exclusively. She has had solo exhibitions in New York at Alleged Gallery and LFL (Zach Feuer) as well as Jack Hanley Gallery in San Francisco and Kantor Feuer, Los Angeles. Her work is in the Judith Rothschild Foundation Contemporary Drawing Collection at The Museum of Modern Art and The New York Public library.

Simone is married to Adam Rapoport since June 1, 2007. The couple met while she was working at Babbo. Adam is a food journalist and magazine editor. He is a former editor-in-chief of Bon Appétit magazine from 2010 until he resigned in June 2020.

She has a son known as Marlon Rapoport who was born in December 2007.

In 2013 Shubuck and Rapoport put on brownface for Halloween. Shubuck posted the picture on her Instagram with the caption “me and my papi” and the hashtag “boricua,” a synonym for Puerto Rican. The post came to public attention in June 2020 after a freelance writer for Bon Appetit unearthed the picture.

I do not know why Adam Rapoport simply doesn’t write about Puerto Rican food for @bonappetit himself!!! https://t.co/rW0k5tjMoS pic.twitter.com/odZnFLz2gd

They faced backlash with people calling for Rapoport to be fired. There were also allegations that Bon Appetit discriminated against minorities.

On May 8, Rapport announced through a post on his Instagram page that he was stepping down as editor-in-chief of Bon Appetit.