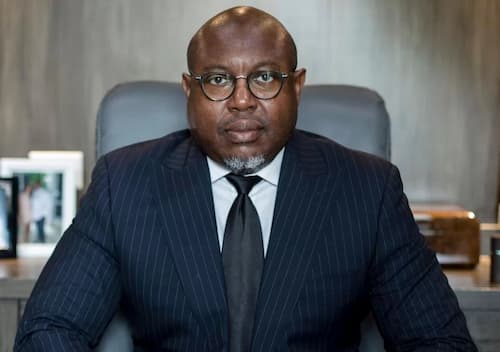 Simon Guobadia (born; Simon Iyore Guobadia) is a Nigeria born American entreprenuer.  He is the founder and CEO of Simcol Group of companies and Simcol Petroleum Limited Company.

He belongs to African ancestry.

He is a Nigerian and American national.

He attended Loyola College Ibadan in Nigeria and received his BBA in Accounting from the University of the District of Columbia in 1993.

Simon was married to Falynn Guobadia, a reality star, influencer and model. She is a cast member of The Real Housewives of Atlanta. She joined the show in 2021 during the show’s 13th season. The couple appeared on RHOA season 13 as a married couple. The two were together for five years having been married for two.  Simon filed for divorce in January 2021 but he later withdrew and refiled in February.

After the divorce, Simon accused Falynn of infidelity while they were still married. He alleged that she cheated with Simon, her now fiance whom she is having a child.

Falynn however denied the claims. She was asked about the accusation during a conversation with Newell. She however didn’t give a clear answer on whether Simon cheated.

“I’ll say this: Simon and I are not new to couple’s therapy. During one of our therapy sessions, I will never forget it — I’ve never forgotten it, actually — the therapist asked him, ‘Have you ever cheated on Falynn? Would you ever cheat on Falynn?'”. She claimed that Simon’s response was, “‘Simon doesn’t get caught unless Simon wants to get caught.'”

Simon is in a relationship with Porsha Williams. The couple began dating in April 2021 and got engaged in May 2021. Porsha was accused of causing Simon to divorce Falynn but she dismissed the rumor setting the record straight. She alleged that she began dating Simon in April and at the time he had filed for divorce from Falynn.

Porsha is a model, actress, singer and television personality. She is nest known for her appearance on The Real Housewives of Atlanta.  Porsha tattooed Simon’s middle name on her neck as a sign of devotion to Simon. She said she put the tattoo there and not ‘somewhere it’s exciting for him to go’ because in that area it doesn’t hurt. “I don’t like no pain. Right here it doesn’t hurt and, you know, I think that’s cute.”

Simon’s first wife was Karron English is a fashion designer and works as a college professor at the Art Institute of Atlanta. The two were married for 20 years and have two children together. He was also in a relationship with Connie Andrade-Rivera, a plus-size model with whom he shares his youngest daughter, Ximena.

Simon has five children from his previous marriages; Quentin, Nicole, Christian, Benjamin and Ximena. Quentin is a film maker who studied for his master’s in cinematography and film/video production at Brooklyn College.

Nicole is a STEM Ph.D. candidate at the University of Washington Tacoma. She has a degree in Computer Science.

Simon and Falynn had no children together but Falynn revealed they were pregnant once but lost the pregnancy. She alleged that Simon could no longer have children according to the doctors due to his lifestyle habits. “This came from heavy drinking and smoking, and he wouldn’t change up his habits. We tried for years and I could not get pregnant. So as far as where they are now, I mean, I wish them well.”

Simon appears on the limited series The Real Housewives of Atlanta: Porsha’s Family Matters alongside Porsha. The premier episode gave an inside look on their relationship as they navigate falling in love in the public eye with many opinionated family members watching as well.

He began his career as a Certified Public Accountant, where he worked for various notable organizations in the areas of accounting, auditing, transactional tax consulting, and software development. He left the corporate world to become an entreprenuer founding Simon & Company which eventually became Simcol Gasoline Limited Company, LLC.

Simon had a restaurant called Simon’s Restaurant which he opened in 2017. The restaurant was permanently shut down in 2020 owing to the COVID pandemic. Prior to that, he was the owner of Time and Buckhead Bottle Bar, which closed down in 2014. He had put more than $3.8 million into the Bottle Bar’s functioning.

Simon is also a producer with some of his movies being Jail Dogs, Ken Ford Live from the Buckhead Theatre, Kill and Son of the South.

He has an estimated net worth of $40 million.