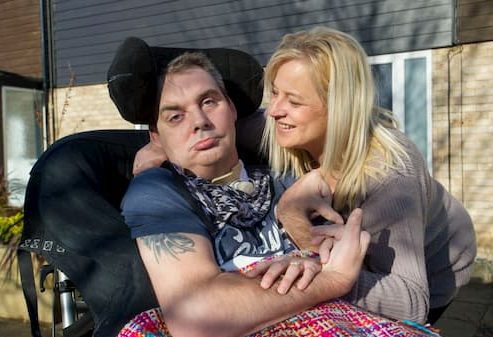 Simon Dobbin was a Cambridge United fan who was left badly disabled after being attacked following a match at Southend United in March 2015. He suffered permanent brain damage and was left unable to walk or talk. He died on October 21, 2020 at home at Mildenhall in Suffolk.

He was 48 years old at the time of his death.

Simon was married to Nicole Dobbin.

He was a father of three, including Emily Dobbin and Rebecca Dobbin. After his attack, Rebecca wrote on Facebook that she wanted Liverpool to support her family.

“My dad is a massive massive fan of Liverpool FC and Steven Gerrard. It would be an amazing feeling for dad to know Liverpool was behind him.”

She told ECHO that she wants to preserve football’s positive reputation in her dad’s name.

“I love watching football, and it’s things like this that make people think football is a bad sport, which it’s not. It’s about saying there’s still that love of football. My dad loved watching Liverpool play, and I’d love Liverpool to be in touch and give us their support, that would be amazing.

I can’t lose him – he’s too young and he’s got three kids, and he’s got three grandchildren and I want him to walk me down the aisle. I want to start a campaign to get hooligans away from football matches. If the worst happens to my dad I want to be the one who can help anyone else who this has happened to.”

Simon was attacked by a group of thugs in March 2015 when he had been in Southend to watch a football game between Cambridge United and Southend United. At around 7.15 pm Simon and a small group of fellow Cambridge supporters were attacked when they went for drinks in the Blue Boar pub.

He was reportedly stomped in a violence that only lasted 90 seconds but during that short time, Simon was knocked unconscious and suffered swelling on his brain. He suffered a cardiac arrest and it took paramedics seven minutes to restart his heart. He then spent four months in an induced coma in Addenbrooke’s Hospital. He returned home to his family in March 2016 after spending almost a year in three different hospitals. He suffered permanent brain damage and was left unable to walk or talk.

Three of the 25 men were convicted at the same trial for conspiracy to commit violent disorder; Greg Allen, Phil McGill and Micheal Shawyer.

One other man, Ian Young was convicted of assisting an offender and admitted possessing a pepper spray. He received an 18-month sentence suspended for two years and was ordered to complete 250 hours of unpaid work.

After his death, Essex Police said they were reviewing the investigation to see if they need to “take any further action”.

Detective Chief Inspector Stephen Jennings said: “Our thoughts go to Simon’s family and friends at this very difficult time. We will review the initial investigation to establish whether we need to take any further action.”

Dobbin was a fan of Cambridge United and was attacked on 21 March 2015 when the team drew 0-0 against Southend United. After his death, Cambridge United released a statement on their website;

“It is with a heavy heart that Cambridge United can confirm we have received the devastating news that Simon Dobbin sadly passed away at home this morning. The thoughts and deepest sympathies of everybody at Cambridge United Football Club are with Simon’s wife Nicole, daughter Emily, and his closest family and friends. We encourage all supporters to leave their messages of condolence and show how much Simon truly meant to the Cambridge United family, via the club’s social media channels. Sweet dreams Simon. Forever a U.”

It is with a heavy heart that Cambridge United can confirm we have received the devastating news that Simon Dobbin sadly passed away at home this morning.

In 2019, in an episode that aired on January 17 on DIY SOS, Nick Knowles and his team transformed the home of Dobbin by building a downstairs extension which included a bedroom, physio space, wet room, social space and the ability to access the entire ground floor and back garden in his wheelchair.

DIY SOS project manager Mark Millar said: “Mildenhall has been absolutely incredible. I’ve been working with the family for the past year, I know how difficult it has been for them. When you see the show, you will be gobsmacked. There were 115 people in one day. It’s been really good fun, absolutely brilliant fun. Wherever we go it’s amazing. The power of the community. It’s replicated right through the country. This country is full of brilliant people.”

After his death presenter Nick Knowles paid tribute to his family, he wrote on Twitter, “Very sad news. His family put everything aside to care for him. Our sympathies are with them.”

Very sad news. His family put everything aside to care for him. Our sympathies are with them https://t.co/ROEWh350PP

Simon died on October 21, 2020, five years after his attack, at his home at Mildenhall in Suffolk. His death was announced by his wife who told the Southend Echo that he died in his sleep and added that she “hopes his attackers live with this guilt everyday for the rest of their lives.”

“The attackers have got what they wanted. He’s gone now. They destroyed his life and ours. He was 48, he should have been in the prime of his life. I just can’t believe it. I’m just feeling so numb, I don’t think it’s sunk in yet.

He usually wakes me up in the night but he didn’t last night. I went into his room to give him his medication this morning, turned the ensuite light on and he’d gone. We’re going to spend some time with friends and family at the moment while we get used to what’s happened. He was laughing with me yesterday before he went to sleep.”