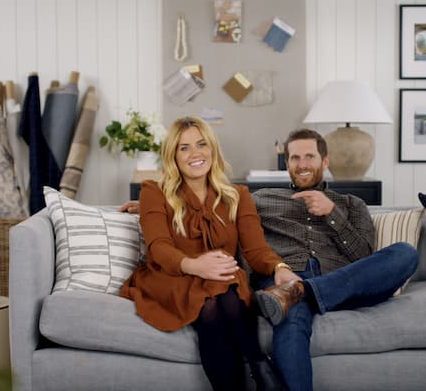 Shea McGee is an American interior designer and blogger. She is the founder and creative director Studio McGee, a design studio, and McGee & Co., a line of home products featured through Target. She is featured on the Netflix series, Dream Home Makeover, alongside her husband Syd McGee.

She has a Bachelor of Arts degree in Communications with an emphasis on Public Relations from Brigham Young University (BYU).

She is married to Syd McGee who serves as the CEO at Studio McGee. He studied marketing and previously managed an affiliate marketing startup focused on email marketing. The couple got married in 2008 in the Salt Lake City Temple and held a reception at a beautiful barn in Mapleton. Their relationship began after they bumped into each other, before going for a date the next day.

Shea is a mother of three daughters, Wren,  Ivy and Margot.

McGee has not revealed anything about her faith but she graduated from Brigham Young University which is a private researcher university owned by the Church of Jesus Christ of Latter-day Saints, or the Mormon Church.

The couple also got married in the Salt Lake Temple which is a temple of The Church of Jesus Christ of Latter-day Saints in Temple Square. It is the fourth temple built since the Mormon exodus from Nauvoo, Illinois, in 1846.

A page on Mormon Wiki, however, claims both Shea and Syd are members of the Church of Jesus Christ of Latter-day Saints, but the page doesn’t list a source for that information.

Shea is a professional interior designer who began taking community college courses in interior design just for fun, at the time she was working in Public Relations but didn’t like it.

“I just signed up for one class to begin with. I’m really glad I just did it because it helped me see that that was the highlight of my week.”

She started a side design business and later decided to move to Utah as her parents lived there and could get family help.

“We were living in southern California at the time and just felt really strongly that we needed to move here. My parents live here and then we could have family help. We just decided to go for it.”

Together with her husband, they joined forces and set up a studio space in downtown Salt Lake City. They have since launched an e-commerce site after getting hundreds of emails a day asking where products are from.

She revealed that they were approached by HGTV to do their own show in 2015 but were deemed “not dramatic enough” by producers. This led to the launch of a web series on their website.

She together with her husband are the founders and owners of Studio Studio McGee and McGee & Co. Shea is the creative director. According to Studio McGee website, the company was born from the idea of making life beautiful. After graduating from the university Shea channeled her energy into remodeling their first home while documenting the results. As a result, she attracted a long client roaster and in 2014, together with her husband they decided to launch their interior design firm with one directive in mind, “Make Life Beautiful.” As the firm’s design grew they launched their e-commerce brand, McGee & Co. in 2016.

Shea and her husband Syd have a new series, Dream Home Makeover, which premiered on Netflix on October 16, 2020. In the series, the couple tackles various home renovation projects — from fancy basement theaters to breathtaking kitchens — while also juggling life at home.

During an exclusive interview with US Weekly Shea said; “We really tried to incorporate the visuals that you see on our Instagram page into the show so it’s all very naturally lit, bright and airy spaces. Plus, we mix in our family relationship dynamics with business.”

“When we started filming, [creating our home] was a huge part of our lives. We were about to start our business, we sold our very first home and we had been living in rentals while we designed everyone else’s homes. So this was a full circle moment for us to be able to design our own. It took a lot of attention, so it felt very natural to have that be part of the show.”

Shea revealed that she has veneers. She said she has a long history of trying to straighten her teeth as she had chipped two of his teeth while in high school and his dentist just reshaped them but they were still crooked and uneven.

“I tried to pull them down and straighten things out with Invisalign three times. When that didn’t do the job, I tried braces and it still didn’t work, so I gave up. A few months ago my front tooth chipped slightly so my dentist just shortened everything up for me and my teeth kept getting filed shorter and shorter and I was self-conscious about one side of my mouth and would always try to smile in a way that hid it. I finally just realized that veneers were the right move for me, so I flew to Dr. Harris in Arizona and it has truly been the best experience!”

This guesthouse makes us want to crack open our windows and soak in all of the vitamin D. ☀️ It’s difficult to sum up two years worth of work in a few webisodes, but we’re glad you’ve been able to get a little taste of this incredible project! As always, thank you @ericolsendesign and @dagandesign for collaborating with us and bringing our client’s vision to life!