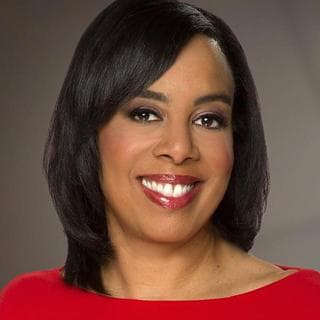 Sharon Emily Epperson is an American media personality serving as a Senior Personal Finance Correspondent for CNBC and also appears on NBC News shows Today and NBC Nightly News. She previously worked as a correspondent for Time magazine and also interned for several prominent papers, including The Wall Street Journal, The Washington Post and The Boston Globe.

Epperson was born on 12 April 1968 in Pittsburgh, Pennsylvania, United States.

She stands at a height of 5 ft 8 inches tall.

Sharon attended Taylor Allderdice High School in Pittsburgh and was inducted into their alumni hall of fame in 2011. She holds a bachelor’s degree in sociology and government from Harvard University, a master’s degree in international affairs from Columbia University, and an honorary doctorate from Carlow University in Pittsburgh. At Harvard, she joined the Lambda Upsilon chapter of the Alpha Kappa Alpha sorority and has been an adjunct instructor of international affairs at Columbia University’s School of International Public Affairs since 2000.

Sharon is the daughter of  Dr. David E. Epperson and Cecelia T. Epperson. Her father was a Dean and a professor of the School of Social Work at the University of Pittsburgh for nearly 30 years and was the first African-American dean at the school. He also served as vice-chair of the Urban Redevelopment Authority of Pittsburgh, on the board of trustees for the YMCA of the USA, on the board of directors of the YMCA of Pittsburgh, and as a member of PNC Bank’s Urban Advisory Board, and also served as a member of the Pittsburgh Foundation’s Copeland Fund Advisory Committee and its Lemington Home Advisory Board. Epperson earned four degrees from the University of Pittsburgh—a 1961 bachelor’s degree in political science; master’s degrees in social work (1964) and in political science and international affairs (1970); and a 1975 Ph.D. in political science and public policy. He, unfortunately, died of an apparent sudden cardiac arrest.
Her mother is a former public school teacher who earned bachelor’s and master’s degrees from Pitt’s School of Education.

On September 21, 2016, Epperson was exercising before work when she began suffering a severe headache. She was rushed to the hospital and was diagnosed with a brain aneurysm. A brain aneurysm occurs when an artery wall weakens, creating a bulge that can fill with blood. If a rupture occurs, it can cause bleeding into the brain — a type of stroke called a subarachnoid hemorrhage. She underwent emergency surgery, spent two weeks in the ICU, and endured months of exhaustive rehabilitation, including learning to walk again. She has become a staunch advocate for health and wellness issues, raising awareness about brain aneurysms and funding for research. In September 2018, she and her family established “The Sharon Epperson Chair of Research” through the Brain Aneurysm Foundation to provide grants for research on early detection and innovative treatments.

Epperson is married to Christopher John Farley, an award-winning Jamaican-born American journalist, columnist, and author who currently serves as an editor of The Wall Street Journal. He is a graduate of Brockport High School and Harvard University and has been a writer for Time magazine since 1992.  John is the author of the fact-based novel Kingston by Starlight, the novel My Favorite War; and biographies Before the Legend: The Rise of Bob Marley; Aaliyah, More Than a Woman; Introducing Halle Berry; The duo exchanged their marriage vows on August 30, 1997.

Sharon and her husband are parents to two children, a son Dylan Farley and a daughter Emma Farley.

Epperson joined CNBC in 1996 serving as a senior energy correspondent, stationed at the New York Mercantile Exchange (NYMEX) covering the commodities markets on a daily basis for eight years. She currently serves as CNBC’s senior personal finance correspondent and covers the many facets of how people manage, grow and protect their money. Her expertise includes saving and investing for retirement, paying for college, managing mortgage, student loan, credit card and other debt, and building a financial legacy through estate planning.

Epperson is a lead contributor to “Invest in You: Ready. Set. Grow.,” a multi-platform financial wellness and education initiative at CNBC in partnership with the micro-investing app Acorns, and developed its companion 8-week learning course and weekly newsletter, “Invest in You: Money 101.” She also contributes to NBC’s TODAY and NBC Nightly News as well as Today.com and NBCNews.com.

Sharon is committed to improving financial literacy, particularly in underserved communities. She was invited to the White House during President Obama’s administration to speak about financial literacy and to moderate a public meeting of the President’s Advisory Council on Financial Capability at the U.S. Treasury Department. She also speaks frequently at conferences and events for local and national organizations, colleges and universities about many facets of personal finance.

Her personal finance expertise has been featured in numerous publications, including The Wall Street Journal, The Washington Post, The Boston Globe, USA Weekend, Self, Essence, Ebony and TIME, where she had covered business, culture, social issues and health as a correspondent.

Sharon is an adjunct professor at Columbia University’s School of International and Public Affairs and has also taught courses at Columbia’s Graduate School of Journalism.

Sharon is the author of The Big Payoff: 8 Steps Couples Can Take to Make the Most of Their Money and Live Richly Ever After. Her book  was a finalist for the Books for a Better Life Awards, honoring works that have “changed the lives of millions.” She also was a contributing writer for The Experts’ Guide to Doing Things Faster.