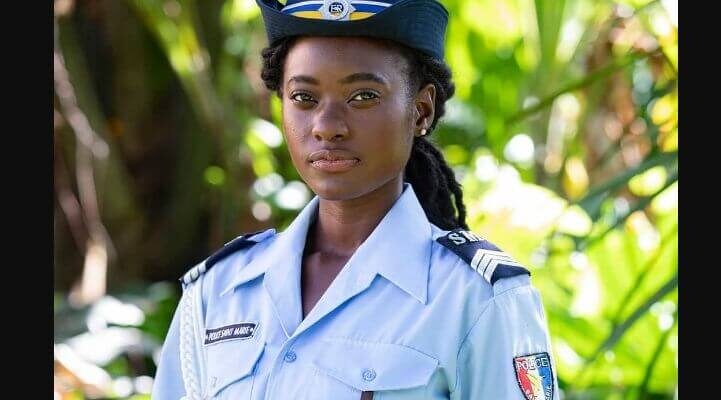 Shantol Jackson is a Jamaican international actress who currently stars in the popular BBC series “Death in Paradise” as a young Seargeant, Naomi Thomas. The first episode of season 11 aired on BBC one at 9 pm on Jan 7, 2022  ad comprises eight episodes, with the finale scheduled to air on February 25, 2022.

Besides staring in the Drama series,  Shantol has also stared in Idris Elba’s Yardie, Jamaican blockbuster Sprinter (with Usain Bolt), and several other Jamaican films and series. Back in 2017, Jamaica’s Prime Minister Youth Award for Excellence in Arts & Culture.

Shantol Jackson is currently 28 years old and was born on July 6, 1993. In 2016, her friend Suane  posted an Instagram post wishing her a happy birthday in a statement that reads, “I wanna wish my beautiful and talented sister a happy birthday love to the moon and back baby @shantoljackson”

Shantol was brought up by her dad and stepmom in the streets of Portmore, St Catherine. Her teachers at Southborough Primary School discovered her artistic talents and encouraged her to pursue a career in acting.

She says in an interview that she started doing music and speech and had two teachers in grades 4 and 5 who taught them folk songs and how to play instruments. She entered the first staging of Miss Southborough and won Best Talent for a poem written by her grade 5 teacher. The passion was there but not yet developed since she was still young. She would hone her skills at Ardenne High School after joining the drama club.

Shantol Jackson comes in as a new addition on the BBC Drama, Death in Paradise season 11 reprising the role of Sgt Naomi Thomas. The series which premiered in January is scheduled to air towards the end of February.  Speaking to BBC one in an Interview, Shantol was asked whether she knew about the Drama series before becoming a cast member to which she said, “My dad and I used to watch it all the time when I was growing up.”

Expressing her excitement in a post on Instagram, she expressed her thanks for all the positive feedback and encouragement, “Thank you to the entire cast and crew and production team for the support and professionalism and an overall great experience.”

Shantol is not married at the moment and it is unclear if she is dating anyone. She was previously rumored to be dating Akeem Migott a Jamaican actor but she has since come out to term the rumours as baseless.