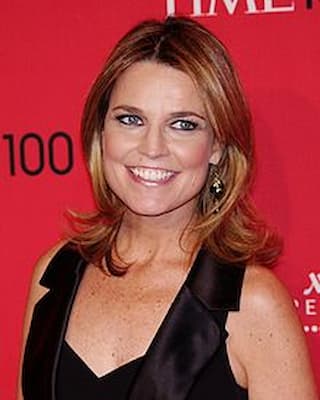 Savannah Clark Guthrie is an American media personality serving as the main co-anchor of the NBC News morning show Today. She previously worked at ABC affiliate KMIZ, in Columbia, Missouri as well as at NBC affiliate KVOA and at WRC-TV, Washington, D.C.

Savannah was born on December 27, 1971, in Melbourne, Victoria, Australia.

Guthrie is the daughter of Charles Guthrie and Nancy Guthrie who worked in public relations for the University of Arizona.  Her father died of a heart attack while she was 16 years old. In one of her articles, she describes her father as” a seemingly unlikely mix of qualities: always strong, sometimes terrifying, loyal to the end, and disarmingly gentle and tender when it counted. He was also tall, affectionate, and funny; he had that personality that people describe as “lighting up the room.” He was a 5,000-watt bulb who could turn a mundane trip to the post office into a rip-roaring tale. People adored him and gravitated towards him. But for all these wonderful and magnetic traits, the one I remain most grateful for is his integrity. He had an unbending notion of right and wrong. His moral clarity was demanding and sometimes intimidating, but he tempered it, at the moment you most needed and least expected it, with kindness and mercy.”

Guthrie was brought up alongside her elder sister Annie Guthrie, who is a poet.  She  describes her  as her ” biggest cheerleader.” S he also has a brother, Camron Guthrie who is a pilot with the Vermont Air National Guard.

She is married to Michael Feldman, former Democratic political aide, who also served as Al Gore’s traveling chief of staff during the 2000 presidential election campaign. He currently works as a consultant and is the founding partner and managing director of The Glover Park Group, a communication, consulting, and advocacy firm.

The two met during  Michael’s 40th birthday party. They started dating shortly after before getting engaged four years later in May 2013 while on vacation in Turks and Caicos. The  couple later  got married on March 15, 2014, in a small ceremony near Savannah’s hometown of Tucson, Arizona
Before Savanna met Michael, she was married to former-BBC journalist Mark Orchard. The two split up and divorced after four years of marriage in  January 2009.

Savannah and her husband have two children, a daughter Vale Guthrie Feldman who was born in August of 2014 and a son Charles Max Feldman born in December of 2016. The couple broke the news that they were expecting their first child during their wedding ceremony.

Is Savannah Guthrie a Democrat

Guthrie’s political party affiliation is considered Liberal by website Reporter Bias. However, she appears to openly support neither Democrats nor Republicans and in the past has been able to interview members of both parties without showing bias

Guthrie became a correspondent for NBC News in September 2007 and currently serves as the main co-anchor of the NBC News morning show Today. She is also an NBC News anchor and substitute anchor on NBC Nightly News. On December 18, she was named a White House correspondent for NBC News and she contributed to all NBC News properties. On October 14, 2020, Guthrie served as moderator for the town hall scheduled by President Trump after he caught COVID-19 and refused to participate in a virtual presidential debate that was postponed for safety reasons. When Joe Biden scheduled a solo town hall debate, Trump scheduled one at the same date and time as Biden’s debate.

After Guthrie substituted for both Meredith Vieira and Ann Curry on Today, it was confirmed on May 9, 2011, that she would become co-host of the 9 a.m. hour alongside Natalie Morales and Al Roker, and the show’s Chief Legal Editor. The move came after Vieira announced her departure from the show as co-host of the main program, and the subsequent promotions of Curry and Morales to main co-host and news anchor, respectively. Guthrie departed The Daily Rundown for Today on June 9, 2011, at which time she was appointed NBC News chief legal analyst,  On June 29, 2012, it was announced that Guthrie would co-anchor Today, replacing Curry. Her first day as co-anchor alongside Matt Lauer was on July 9, 2012.

In 2011, she conducted an interview with Donald Trump in which he discussed his role in the Barack Obama “birther” controversy. Later that year, she interviewed Conrad Murray after he was found guilty of involuntary manslaughter in the death of Michael Jackson. She reported exclusive details on the death of Osama bin Laden. On November 29, 2017, Guthrie succeeded Matt Lauer as host alongside Hoda Kotb. Since 2012, she has hosted the Macy’s Thanksgiving Day Parade on NBC and the annual Rockefeller Center Christmas tree lighting and was included in Time’s list of 100 most influential people of 2018.

Prior to joining  NBC News, Savannah worked at ABC affiliate KMIZ, in Columbia, Missouri, where she worked for two years before returning to Tucson and also worked with NBC affiliate KVOA in 1995.  Guthrie also worked for WRC-TV, Washington, D.C. where she covered major stories including the September 11, 2001, attack on The Pentagon and the 2001 anthrax attacks.

After working several years as a broadcast journalist, Guthrie chose to resume her higher education, receiving a Juris Doctor from Georgetown University Law Center, where she graduated in 2002. She is a member of the bars of the District of Columbia and Arizona, having scored first place on the Arizona Bar Exam. She also was a member of Order of the Coif and received the International Academy of Trial Lawyers’ Student Advocacy award for her work with victims of domestic violence.

She also worked for the law firm Akin Gump Strauss Hauer & Feld, where she served as a litigation associate, specializing in white-collar criminal defense. In 2004, she became a national trial correspondent for CourtTV. She covered high-profile legal proceedings including the Senate Judiciary Committee confirmation hearings of U.S. Supreme Court nominee Samuel Alito, the abduction and murder trial of Carlie Brucia, the Martha Stewart case, and the Michael Jackson trial.

Guthrie is the author of two children’s books: Princesses wear Pants and Princesses Save the World.

She earns an annual salary of $ 8 million.

Guthrie has an estimated net worth of $30 million.