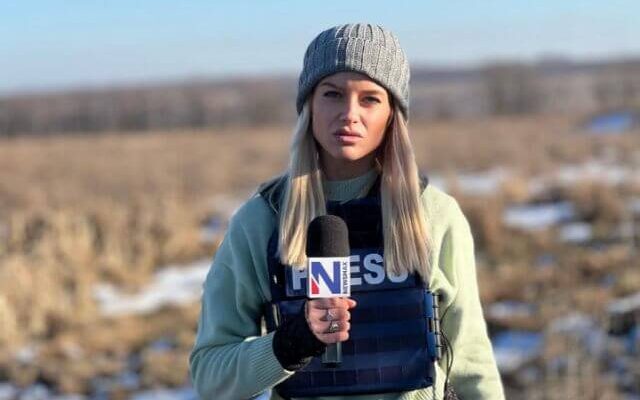 Sarah Williamson is an Anchor and Reporter who is currently working for Newsmax as a New York Correspondent. She joined Network in Dec 2021. She is currently in Ukraine covering the Russian invasion of Ukraine.

She has in the past covered the federal trial of Ghislaine Maxwell who was charged with sex trafficking and perjury in connection to the case against convicted sex offender Jeffrey Epstein. Speaking of her experience at Newsmax, Williamson said, “It has been such a soft landing here at Newsmax,” She further said that. “The people here are incredible, and every day at work is so enjoyable. It’s unlike any newsroom I have worked in before.”

Willamson was previosly working for an Israel News channel, i24News as News Anchor from July 2017 to Dec 2021.  While at the network, she covered the Middle East and the Palestinian-Israeli conflict and hosted two programs for i24 News, “Israel Business Weekly” and “Trending,” a show focused on culture and entertainment topics from the United States to the Middle East.

Her career began as a producer in her native country Australia,  where he worked for the Television outlet Channel Nine, and its long-established nightly program “A Current Affair” from Oct 203 to Jul 2017 as per her Linkedin.

She did her Bachelor of Arts (B.A.), Political Science and Government at Victoria University in Melbourne, Australia.

Williamson is currently in a relationship with Tal Erel, a 23-year-old Israeli baseball player for the Israel National Baseball Team. On Christmas, she shared a photo of herself with Erel with the caption, “Merry Christmas from me and mine, to you and yours ❤️🎄”

In another post on June 16, 2020, she wished him a happy birthday in a post captioned, “Happy birthday to this absolute 10. I hope your day is as perfect as you are ❤️”