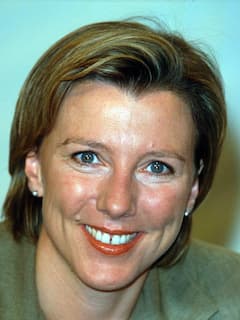 Sarah Anne Louise Montague is a British media personality currently working for BBC Radio 4 as the lead presenter on the station’s lunchtime news broadcast, The World at One. She previously served as an anchor and reporter for Channel Television as well as a business correspondent for Sky News.

Sarah attended Blanchelande College, a local independent girls’ school and later joined the University of Bristol where she graduated with a Bachelor of Science degree in Biology.

Montague was born to John Montague and Mary Montague. Her father was a Colonel in the British Army while her mother was a homemaker.

Information on whether she has siblings is not revealed.

Sarah is married to Richard Christopher Brooke, an Old Etonian businessman, whom she met while he was setting up a hotel in Holkam, Norfolk.They are friends of former Prime Minister David Cameron, with whom they attended Eton College. The duo exchanged their marriage vows in 2002 in a private ceremony attended by close family and friends.

Montague and her husband Richard are proud parents of three daughters and they also have a stepdaughter from her husbands previous affair.

Sarah is currently working as the Lead presenter of BBC Radio 4’s lunchtime news broadcast, The World at One which she took over from Martha Kearney in April 2018. She previously served as one of the best regular presenters of the BBC Radio 4 early morning current affairs programme, Today for 18 years where She realized that she was earning much less than her male colleagues, with John Humphrys earning more than four times her salary. She described herself as “incandescent with rage” when she found out she was earning less than other presenters. In January 2020 Montague revealed that she had received a £400,000 settlement and an apology from the BBC for her unequal treatment.

In December 2008, she hosted BBC World’s Nobel Minds in the library of the Royal Palace, Stockholm. The 2008 Nobel Prize winners in Physics, Chemistry, Medicine, Economics, and Literature had a round-table discussion on issues of global concern and their own contributions to the world of knowledge. In 2002, she joined the Today news programme on BBC Radio 4. Previously she worked for BBC where she presented Newsnight and BBC news. She presented the very first programme on BBC News 24 with Gavin Esler on 9 November 1997. She has also presented HARDtalk on BBC News.

Prior to joining BBc, Montague aslo worked as a business correspondent for Sky News and also worked at  Reuter as well as a journalist for Channel Television and worked as a stockbroker for County NatWest and then a Eurobond dealer with NatWest Capital Markets in London She then got into business in London with the owner of men’s clothing retailer Charles Tyrwhitt.

Sarah is a professor in the Communication department at The New School for Social Research. She serves as an Assistant Part-time Professor at the Eugene Lang College and she is one of the founders, and faculty advisors, for The New School’s Internet radio station, newschoolradio.org.

Sarah has an estimated  net worth of $1 million.