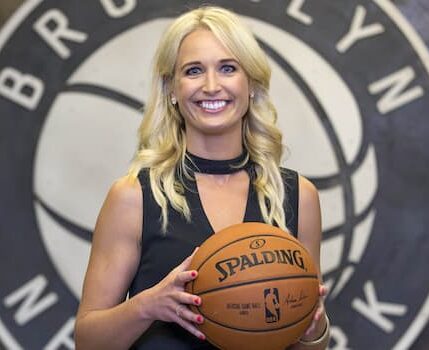 Sarah Kustok is an American sports journalist serving as the primary Brooklyn Nets Game Analyst for YES Network. She is also a regular contributor to FOX Sports 1’s First Things First-morning show as an NBA analyst and also an analyst on FS1’s Men’s Big East regular-season telecasts and at Sirius XM NBA Radio.

She attended Carl Sandburg High School’s (Orland Park, Ill.) where she was inducted into the Athletic Hall of Fame in November 2018. While there she used to play on the boys basketball team from fifth grade until high school, regularly joined in. She earned a basketball scholarship to DePaul, where she became known for her feathery jump shot. She spent four years playing basketball for DePaul and then enrolled in the school’s Corporate Multicultural Communication Master’s program because she wasn’t sure what to do next.

Sarah is the daughter of Allan Kustok and Anita Kustok. Her mother was a teacher at Riverside’s Central Elementary School.

Sarah’s father, Allan Kustok was sentenced to 60 years in prison for killing his wife. On September 29, 2020 Allan was alleged to have shot his wife but he said he awoke to the sound of a gunshot and saw his wife dead beside him in bed, bleeding from a gunshot wound to the face with the .357 Magnum pistol he gave her as an anniversary gift either in or near her hand.

According to the prosecutors, Allan waited some period of time with the body before calling for help, wiping blood from his wife’s face and hands and firing the remaining five bullets in the gun into an armoire at the bedside, claiming he feared he might turn the weapon on himself. The prosecution’s expert witness, Rod Englert said that the blood spatter patterns on his clothing and glasses could only have been created by high-velocity impact, such as a gunshot.

The prosecutor said Allan shot his wife while carrying on multiple extramarital affairs. The prosecution called as witnesses several women with whom Kustok had affairs, some of whom testified that Kustok said he was unhappy in his marriage and planned to seek a divorce.

Sarah was the last person to testify and argued that her father was “absolutely not” capable of taking her mother’s life. She said her parents fostered the “most loving, supportive household that I could imagine” and “did everything together.”

She has an elder brother known as Zak Kustok. He is a former football player who played starting quarterback for the Northwestern Wildcats from 1999 to 2001. He was a 2001 Johnny Unitas Golden Arm Award finalist.

Sarah has said that while growing up she would follow her brother, wherever he went, from the basketball court to the football field to the baseball diamond.

Sarah played basketball in high school which saw her earn a basketball scholarship to DePaul. She was a standout on the Blue Demons women’s basketball team which reached the NCAA tournament in 2003 and 2004. She was captain both of those seasons, and the team was ranked in the Top 25 each season. She currently ranks fourth at the school in career three-point field goal percentage.

During the 2005-2006 season, he was an assistant women’s basketball coach at DePaul, helping the team to advance to the NCAA Sweet Sixteen for the first time in program history.

Sarah is the primary Brooklyn Nets Game Analyst for YES Network. She joined the network in 2012 and has won New York Emmy Award for Sports Analyst twice becoming the only woman to ever win that award in New York.

In addition, she is a regular contributor to FOX Sports 1’s First Things First-morning show as an NBA analyst. She is also an analyst on FS1’s Men’s Big East regular-season telecasts. She also works as a sideline reporter for the NFL on FOX and has been a game analyst for FOX Sports’ coverage of the Jr. NBA World Championship in its first two years – 2018 and 2019.

She joined Sirius XM NBA Radio in 2019 as an analyst. She also is a host of the monthly We Need To Talk show on CBS Sports Network.

Prior to joining YES, she was a reporter and anchor for NBC Sports Chicago. She joined NBC in 2009 and during her tenure there she covered the Chicago Bulls, Chicago Cubs, Chicago White Sox and the Chicago Blackhawks as the network’s reporter. She also anchored sportscasts on WMAQ-TV (NBC) in Chicago. Prior to joining NBC Sports Chicago, Kustok worked as an analyst and sideline reporter with ESPN and appeared on Versus (now NBC Sports Network).

Her estimated annual base salary is $58.5k.