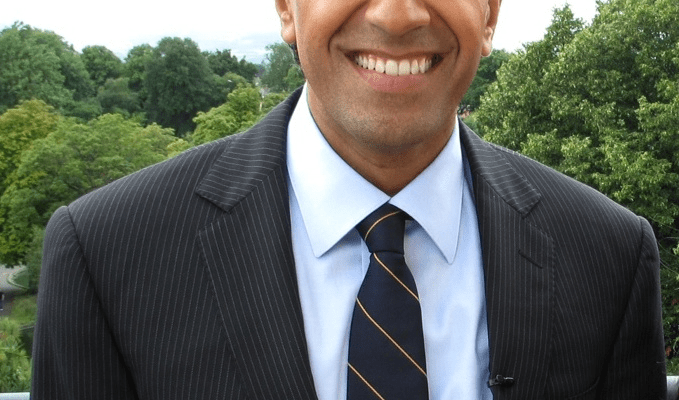 Sanjay Gupta is  American medical reporter, neurosurgeon and writer. He is the chief medical correspondent for CNN based in Atlanta. He is also the associate chief of the neurosurgery service at Grady Memorial Hospital in Atlanta, Georgia and associate professor of neurosurgery at the Emory University School of Medicine.

He was part of Inteflex, a since discontinued accelerated medical education program that accepted medical students directly from high school. As an undergraduate, he served as president of the Indian American Students Association (IASA).

He completed his residency in neurological surgery within the University of Michigan Health System, in 2000.

Gupta’s parents, Subhash and Damyanti Gupta, moved from India prior to their marriage and met in Livonia, Michigan. They worked as engineers for Ford Motor Company. His mother was born in the village of Tharushah in Sindh (now Pakistan), but at age five fled to India as a Hindu refugee during the partition of India.

He has two brothers, Suneel and Yogesh Gupta.

Gupta married Rebecca Olson, a family law attorney, in 2004 in a Hindu wedding ceremony. They live in Atlanta.

Gupta is the chief medical correspondent for CNN. He, a practicing neurosurgeon, plays an integral role in CNN’s reporting on health and medical news for Starting Point with Soledad O’Brien, Anderson Cooper 360°, CNN documentaries and anchors the weekend medical affairs program Sanjay Gupta, MD. He also contributes to CNN.com and CNNHealth.com.

He joined CNN in the summer of 2001 and he is based in Atlanta.

He contributed to the network’s 2010 Peabody Award-winning coverage of the oil disaster in the Gulf of Mexico. In 2006, Gupta also contributed to CNN’s Peabody Award-winning coverage of Hurricane Katrina, revealing that official reports that Charity Hospital in New Orleans had been evacuated were incorrect. His “Charity Hospital” coverage for Anderson Cooper 360° resulted in his 2006 News & Documentary Emmy® for Outstanding Feature Story. In 2004, he was sent to Sri Lanka to cover the tsunami disaster that took more than 155,000 lives in Southeast Asia, contributing to the 2005 Alfred I. DuPont-Columbia Award for CNN.

Gupta’s passion for inspiring Americans to lead healthier, more active lives led him to launch “Fit Nation,” CNN’s multi-platform anti-obesity initiative. In 2009 “Fit Nation” followed the progress of Gupta and six CNN viewers as they inspire each other while training for a triathlon. The program is in its third year.

In addition to his work for CNN, he is a member of the staff and faculty at the Emory University School of Medicine. He is also associate chief of neurosurgery at Grady Memorial Hospital and regularly performs surgery at Emory University and Grady hospitals. He holds memberships in the American Association of Neurological Surgeons, Congress of Neurological Surgeons, and the Council on Foreign Relations. Gupta serves as a diplomat of the American Board of Neurosurgery, is a certified medical investigator, and is a board member of the Lance Armstrong LiveStrong Foundation.

Before joining CNN, he completed separate neurosurgical fellowships at the Semmes-Murphey Clinic in Tennessee, and the University of Michigan Medical Center. In 1997, he was selected as a White House Fellow, serving as a special advisor to First Lady Hillary Clinton.

In 2003, Gupta was named one of PEOPLE magazine’s “Sexiest Men Alive” and a “pop culture icon” by USA Today. That same year he also won the Humanitarian Award from the National Press Photographers Association.

In 2010, he was honored by John F. Kennedy University with its Laureate Award for leaders in health and wellness. 2011, Forbes magazine named him as one of the “Ten Most Influential Celebrities.”

In 2010, Gupta reported on the devastating earthquake in Haiti, for which he was awarded two Emmy®s. His distinctive reporting in 2010 included live coverage on the unprecedented flooding in Pakistan.

His annual salary is $4 million.