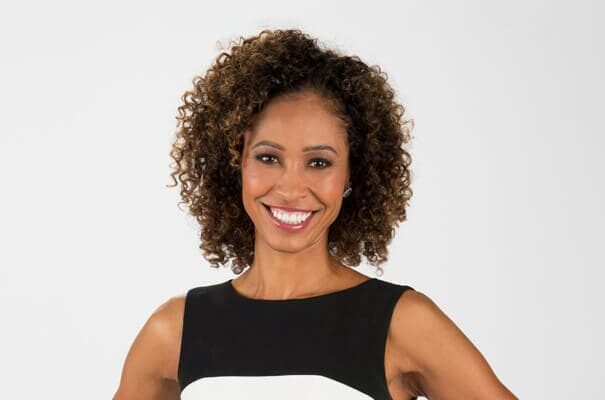 Sage Marie Steele is an American sportscaster and co-host of ESPN’s SportsCenter at 12 p.m. (ET). She also presents SportsCenter on the Road, which broadcasts from athletic events including the Super Bowl and the Masters.

Steele earned a Bachelor of Science in sports communications from Indiana University in 1995. Steele is on the Pat Tillman Foundation’s board of directors and is dedicated to assisting military veterans. In 2019, she was also appointed to the V Foundation for Cancer Research’s board of directors.

She is the loving daughter of Gary & Mona (O’Neil) Steele. Mona is of Irish and Italian descent. Gary is black and was the first to play varsity football at West Point during the mid-1960s

She has two brothers, Courtney and Chad. Chad is the senior vice president of media relations for the NFL’s Baltimore Ravens.

Steele has been married to Jonathan Bailey since 1999. The duo dated for six years after meeting at Indiana University. .

Additionally, from 2013 to the 2016-17 NBA season, she was the host of the NBA Countdown on ESPN and ABC. Steele joined ESPN in 2007 and was a regular SportsCenter anchor until 2013. From 2010 to 2013, she was the host of the Scripps National Spelling Bee. She has also contributed to First Take and Mike & Mike, as well as serving as a guest co-host on ESPN2’s SportsNation. During the inaugural College Football Playoff, Steele headlined ABC and ESPN’s New Year’s Rockin’ Eve. Steele has formerly co-hosted the Miss America competition on ABC.

Along with that, she has also appeared on Jimmy Kimmel Live and been featured in Rolling Stone, Wall Street Journal, Vibe, and Huffington Post, to name a few publications. The Indiana University graduate got the distinction of driving the pace car. This was at the historic Indianapolis Motor Speedway prior to the 2013 NASCAR Brickyard 400. She has also appeared as a guest host on ABC’s The View.

Moreover, Steele began her television career as a producer and reporter at WSBT-TV in South Bend, Indiana (1995-1997). She later went to Indianapolis’ WISH-TV. Steele relocated to Tampa in August 1998 to work for WFTS-TV as a reporter, anchor, and host. Sage covered the 1999 NCAA Men’s Final Four as a beat reporter for the Tampa Bay Buccaneers from 1998 to 2001.

Nevertheless, she was a reporter for Fox Sports Net in Tampa in 2000, covering Super Bowl XXXV during the 2000-01 NFL season. Steele debuted as the anchor for Comcast SportsNet, which serves the Washington, DC/Baltimore area, in April 2001. For six years, she hosted SportsNite and worked as a beat reporter for the Baltimore Ravens from 2001 to 2005, as well as anchoring a magazine show.

Her net worth is estimated at $1million -$5 million.