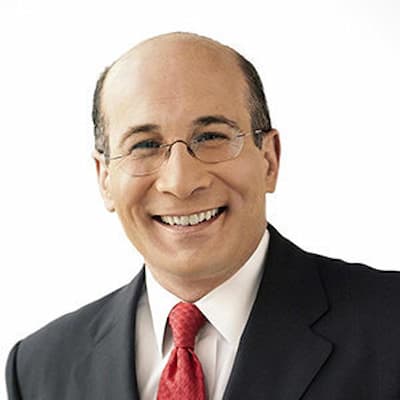 Ron graduated from Chaminade College Preparatory in 1979 and was recognized as “Distinguished Alumnus of the Year” in 2005 and also graduated with honors from California State University at Northridge.

Insana is the son of Adelia Insana and Arthur Insana. His mother was a teacher at St. John the Baptist De La Salle School in Granada Hills, Calif. His father retired as a quality control inspector for Dukes Inc., an aerospace company in Northridge. Born in Buffalo, New York, Insana’s family moved to Los Angeles while he was in seventh grade.

Ron is married to Melinda Marie Panella, an associate producer in Fort Lee, N.J., for CNBC, the cable television network. She is a graduate of Hollins College and the daughter of Patricia and Charles Panella of Tenafly, N.J. Her father is an executive director of the packaging division at Joseph E. Seagram & Sons Inc., the distilled spirits producer in New York while her mother is a broker and the office manager at Saydah Realtors in Tenafly. The duo exchanged their marriage vows in 1995 in a ceremony officiated by Rev. Kenneth M. Near at St. Paul’s Episcopal Church in Englewood, N.J.

Insana and his wife have three children together.

Insana joined CNBC when FNN and CNBC merged in 1991 and curently serves as a Senior Analyst & Commentator on CNBC. He covers the most pressing economic and market issues of the day. He also delivers The Market Scoreboard Report to radio stations around the country. Insana is well-known for his high-profile interviews, which included Presidents Clinton and Bush; billionaire investors Warren Buffett, George Soros and Julian Robertson, among others: captains of industry from Bill Gates to the late Jack Welch and Steve Jobs, top economists, analysts and global heads of state, from former Soviet leader Mikhail Gorbachev to Jordanian Queen Rania.

He is also a regular contributor to NBC’s The Today Show and NBC Nightly News, along with other programs when market activity warrants. He was involved with Imus in the Morning on MSNBC before its cancellation and the 15-minute Market Wrap on sister network MSNBC. Additionally, Insana writes a monthly column for USA Today entitled “Talking Business with Ron Insana” and at one time hosted the nationally syndicated radio program, The Ron Insana Show, on Westwood One.

On March 1, 2006, Insana left his anchor duties when his contract at CNBC expired to start his own hedge fund, Insana Capital Partners. The fund was headquartered in Fort Lee, New Jersey and had seven employees. In August 2008 the fund ceased operations because of investment losses and he joined SAC Capital Advisors in an unknown capacity. On February 27, 2009, Mr. Insana left SAC Capital.

Ron was named one of the “Top 100 Business News Journalists of the 20th Century” and was nominated for a news and documentary Emmy for his role in NBC’s coverage of 9/11.

He has an average annual salary of $1 million.