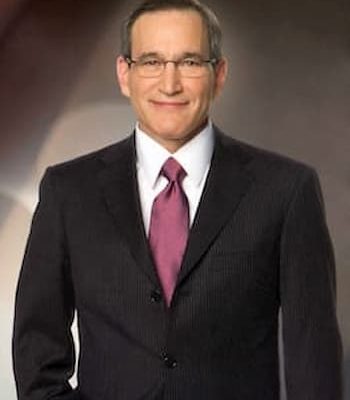 Rick John Santelli is an American media personality serving as an editor for the CNBC Business News network. He is also a regular contributor to CNBC’s “Squawk on the Street and previously worked as vice president of Institutional Futures and Options at Rand Financial Services Inc.

Santelli stands at a height of 5 feet 6 inches tall.

Rick attended Willowbrook High School in Villa Park, Illinois before joining the University of Illinois at Urbana–Champaign, where he was a member of the Alpha Sigma Phi fraternity and graduated with a Bachelor of Science in economics in 1979.

The grandson of four Italian immigrants, Rick was born near Taylor Street in Chicago’s old Italian neighborhood and moved with his family to Lombard, Illinois at age six. No further details regarding his parents are available.

It’s not known if Rick has any siblings since he has kept his family details off the limelight.

Rick is married to Terri Santelli. The two exchanged their marriage vows in 2015 but details of their wedding and how they met are not available. The couple lives in Wayne in Illinois.

Santelli and his wife have three daughters together, Juliet Santelli Cecala, Alyssa Santelli and Lauren Santelli.

“Squawk Box” co-host Andrew Ross Sorkin and Santelli engaged in a heated on-air debate in December 2020 over coronavirus restrictions. The intense disagreement over lockdowns between Sorkin and Santelli, which was also a central theme in the November election, came after the release of a weaker-than-expected November jobs report. The slowest pace of nonfarm payroll growth since April coincided with a sharp rise in coronavirus cases and hospitalizations across the country, which led many governors and other local officials to reimpose virus mitigation measures.

Santelli suggested that U.S. policymakers should reconsider the balance between public-health restrictions, particularly on restaurants, with permitting more economic activity. He alluded to the recent controversies involving politicians such as Democratic Gov. Gavin Newsom of California, who caught heat for attending a birthday dinner for a friend at a posh restaurant in the San Francisco Bay Area.

Sorkin pushed back strongly against Santelli’s remarks, noting public health experts are in widespread agreement that dining at indoor restaurants, where patrons have to take off their masks to eat and drink, presents a much higher risk of coronavirus transmission than shopping at a retail store where all customers and employees have on masks.

Rick joined CNBC as on-air editor in June 1999, reporting live from the floor of the Chicago Mercantile Exchange. His focus is primarily on interest rates, foreign exchange and the Federal Reserve. He is also a regular contributor to CNBC’s “Squawk on the Street ” (M-F, 9 AM-11 AM ET). A veteran trader and financial executive, Santelli has provided live reports on the markets in print and on local and national radio and television.

Santelli drew attention for his remarks made on February 19, 2009, about the Homeowners Affordability and Stability Plan, which was announced on February 18. While broadcasting from the floor of the Chicago Mercantile Exchange, Santelli accused the government of “promoting bad behavior”, and raised the possibility of a “Chicago Tea Party”. He suggested that individuals who knowingly obtained high-risk mortgages (and faced impending foreclosure as a consequence) were “losers”. The Tea Party remark was credited by some as “igniting” the Tea Party movement as a national phenomenon.
In 2020, media reported that, after a series of stock declines driven by fears of a COVID-19 virus pandemic, Santelli stated, during a live broadcast of The Santelli Exchange, on March 5 that “maybe we’d be just better off if we gave [the virus] to everybody, and then in a month it would be over because the mortality rate of [COVID-19] probably isn’t going to be any different if we did it that way than in the long-term picture, but the difference is we’re wreaking havoc on global and domestic economies.” He subsequently apologized for making the “dumbest, most ignorant” remarks about managing the COVID-19 pandemic.

He earns an annual salary of $2 million.

He has an estimated net worth of $8 million.