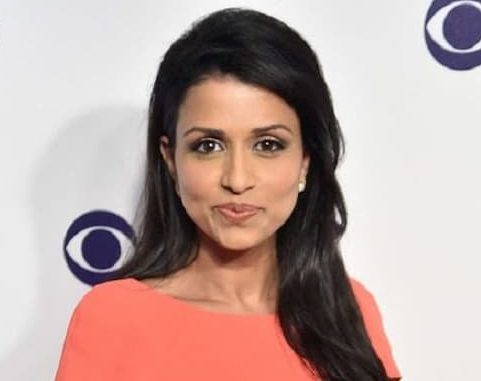 Reena Ninan is an American personality serving as an anchor for CBSN and the Saturday edition of CBS Weekend News. She also reports for “CBS This Morning”, “CBS Evening News” and other CBS broadcasts.

Reena is of Indian heritage.

Ninan stands at a height of 5 feet 4 inches tall.

Reena attended George Washington University, School of Media and Public Affairs where she studied a bachelor’s degree in Political Communication and a minor in Women Studies.

Reena was born to Indian parents who migrated to the United States. There are no details on their names nor if Reena has siblings or not. She keeps that part of her life very private.

Ninan is married to Kevin Peraino, an American author and journalist who is known for his writing skill and theories. His book ‘Lincoln in the world: The making of a Statesman and the Dawn of American Power’ is described as one of the best books on Abraham Lincoln.

Reena and her husband have two children together a son called Jack Peraino and a daughter called Kate Peraino.

Reena joined Fox News Channel in 2007 as the Middle East correspondent. She covered the trial of Saddam Hussein and also reported on the topic of Al Qaeda in the Maghreb. In 2011 she reported on the so-called Arab Spring and interviewed the President of Palestine, Mahmoud Abbas.

In September 2013 she became the New York Correspondent until March 2016. She worked as a reporter for “Good Morning America” and on the “20/20 Nightline,” and other ABC broadcasts.

In 2015 she anchored for World News Now, America This Morning on ABC News and involved in other different projects.

In May 2016 she joined CBS News as a correspondent based in New York City. Ninan anchors CBSN and the Saturday edition of CBS Weekend News. She also reports for “CBS This Morning”, “CBS Evening News” and other CBS broadcasts.

Reena’s net worth is under review.

I put face masks & latex gloves in the goody bags. Head pastry chef (pictured here) chose not to use them. Most memorable bday yet. #ReenasQuarantineLife