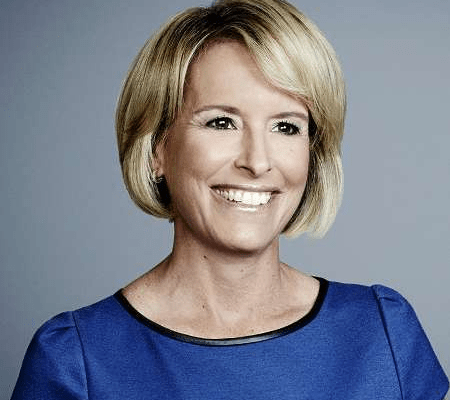 Randi Kaye is an Emmy Award-winning media personality serving as a correspondent and anchor for CNN, based in New York City. She reports for Anderson Cooper 360° and and regularly anchors and reports for CNN’s Documentary Unit.

She is a member of the Alpha Epsilon Phi sorority, which she joined while she was an undergrad at the Boston University.

She is the daughter of Gilbert D. Kaye and Joyce Taffer Kaye. Her mother was a tennis player, she played until the birth of her younger brother Evan. Her father Kaye,  died on November 15, 2002 after committing suicide. She publicly talked about her father’s suicide with  Anderson Cooper detailing her struggles and to promote suicide awareness.

She is married to Ross Holland, mortgage broker. The couple got married on 19 October 2003.

As of 2021, Kaye has no children but is a dog mum of Gatsby who is a golden retriever fom South Korea.

She covered the shooting massacre inside theatre nine in Aurora, CO in 2012 as well as the attack on the Sikh Temple in Oak Creek, WI. In 2006 she provided exclusive interviews with family members of the Sago Mine tragedy as they were first told their loved ones had survived. Kaye reported through the night and was on the air five hours later as families learned the miners had died.

In 2005 she reported live from areas devastated by Hurricane Katrina. She did exclusive coverage from the ground and from the air by joining food supply drops with the National Air Guard.

In 2009 she reported on the attempted Christmas Day bombing of a Northwest Airlines flight and Michael Jackson’s death. She also anchored from Ground Zero in New York City the day Osama bin Laden was killed. Later in the year, she covered the manslaughter trial of Michael Jackson’s doctor, Conrad Murray. In 2010, she spent three months in New Orleans investigating and reporting on the BP Oil Spill.

She also covers politics for Anderson Cooper 360. In 2008 she covered Barack Obama’s campaign. She also traveled to report on Republican Vice Presidential candidate Sarah Palin. In 2013, she covered the Presidential Inauguration and anchored from Washington D.C.

Prior to joining CNN, she was an anchor an investigative reporter at WCCO-TV. She anchored the 5 p.m. and 10 p.m. newscasts and was also part of the station’s investigative team. She covered Jesse Ventura’s gubernatorial campaign and the arrest of the September 11th terrorist Zacarias Moussaoui.

She began her career in journalism at ABC in New York City where she worked at Nightline and alongside former World News Tonight anchor Peter Jennings for five years. She later moved to Arkansas joining KATV, an ABC affiliate where she covered the Whitewater investigation, the suicide of White House counsel Vince Foster and the death of Clinton’s mother, Virginia Kelley.

She has also worked at WFAA-TV, ABC affiliate in Dallas, where she served as a reporter and anchor for Good Morning Texas. She was also an anchor at KMSP-TV, FOX affiliate in Minneapolis where she hosted the nationally syndicated Everyday Living. She worked at UPN affiliate WWOR in New York City where she was an anchor and reporter.

Kaye has not lost significant weight nor talked about it. She is a vegan who urges her followers to experiment with veggies for good health. She also claims that the vegan diet is completely natural and fat burning and has fewer carbs and lowers cholestrol.

As of 2021, Randi has not publicly talked about any illness she is suffering from. She seems perfectly healthy.

Her annual base salary is estimated to be around $50,000