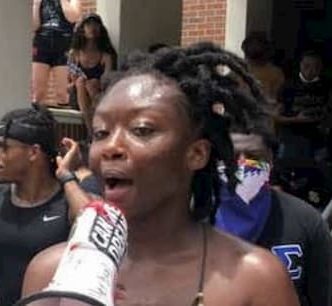 Oluwatoyin Salau was an activist in the Tallahassee community involved in the Black Lives Matter protest. She went missing on June 6, 2020 after she shared on her Twitter account that she had been molested by an unidentified man. Her body was found on June 13, 2020 by Tallahassee Democrat police in the southeast part of town.

She was 19 years old at the time of her death.

She was a Nigerian national.

There is no much information available about her family but a Twitter user alleges that her mother allowed her to be beaten by her family members and that her father abused her also. We cannot verify the claims.

Her mom nor her family members can be trusted! I’ve known Toyin since she was 14 years old and her mom allowed her to be beat on by her family members! Nobody wanted to help her, only to hurt her! Her dad abused her as well!

Salau was an activist of the Black Lives Matter. According to Tallahassee.com, Salau was affiliated with Movement 850, which describes itself as “student leaders and community residents working together to demand justice and policy change” relating to Tallahassee police.

Her twitter page is filled with comments about race, police and other issues affecting society. Some of her posts read;

“The media loves to censor black pain for a groundbreaking story there is no middle ground… keep reporting and fact checking stay on y’all toes.”

“Abeg stop using Black as an umbrella term African Americans are being targeted you people want to say Black but when its any other ethnicity you’ll list the whole al pha bet.”

“it’s so funny how white ppl use reverse psychology for every conflict and it’s not even that effective.”

On June 6, 2020 Toyin revealed on her Twitter account that she was sexually molested in Tallahassee by a black man who offered her a ride.

Anyways I was molested in Tallahassee, Florida by a black man this morning at 5:30 on Richview and Park Ave. The man offered to give me a ride to find someplace to sleep and recollect my belongings from a church I refuged to a couple of days back to escape unjust living conditions.

He came disguised as a man of God and ended up picking me up from nearby Saxon Street. I entered his truck only only because I carry anything to defend myself not even a phone (which is currently at the church) and I have poor vision. I trusted the holy spirit to keep me safe.

When we arrived at his house he offered me a shower and I thanked him and shower and he gave me a change of clothes. He exposed himself to me by peeing with the bathroom open obviously knowing I was out of it. I told him about a sexual assault situation that happened…

Going back to the situation that happened to me this morning, I did not fall asleep. He then asked me if I wanted a massage at this moment his roommate who was in the house was asleep. I was laying on my stomach trying to calm myself down from severe ptsd. He started touching my back and rubbing my body using my body until he climaxed and then went to sleep.

Before I realized what happened to me I looked over and his clothes were completely off. Once I saw he was asleep I escaped from the house and started walking from Richview Road to anywhere else.

All of my belongings my phone my clothes shoes are all assumably at the church where I’ve been trying to track since I sought spiritual guidance/ refuge. I will not be silent.

On June 6, 2020 Toyin Salau went missing. She was last seen in the area of Orange Avenue and Wahnish Way in Tallahassee. On June 10, Tallahassee Police Department classified her as a missing adult and released poster which stated that she was 19 years old, 5 feet, 7 inches tall, weighs 120 pounds and has black hair and brown eyes.

“The Tallahassee Police Department’s Special Victims Unit is seeking information on the location of Oluwatoyin ‘Toyin’ Salau. Salau was last seen on June 6, 2020, in the area of Orange Avenue and Wahnish Way in Tallahassee. She may be in the area of Jakes and Patterson Street. There is no known clothing description for Salau at this time.”

The Tallahassee Police Department released a statement saying that on Saturday night they found two deceased.

“At approximately 9:15 p.m. Saturday night, June 13th, TPD investigators arrived in 2100 block of Monday Road in the course of a follow up investigation in a missing person case. During the course of the investigation, two deceased people were located in the area.

As the investigation continued, investigators developed a suspect. The suspect is now in custody and no more information is available at this time.

The deaths are being investigated as homicides and have been turned over to TPD’s Violent Crime Unit. The investigation is ongoing and currently there are no more details available. More information will be released as the investigation progresses.”

On June 15, 2020 they said they had identified the victims as missing persons Oluwatoyin Salau, 19, and Victoria Sims, 75. Vicki Sims was an AARP volunteer who had also been reported missing. The police added that they had taken a suspect 49-year-old Aaron Glee Jr. into custody.