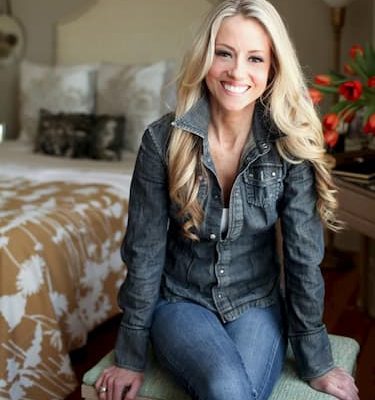 She is the daughter of Joanie Curtis and Rod Curtis. In 2016 her mother requested a personal protection order against Nicole claiming she was being harassed with threatening calls and texts. In August, a judge denied the request, saying she couldn’t “heal family dynamics with the stroke of a pen.” She also added that it should be enough that the two parties had agreed they didn’t want to have contact with each other.

Nicole also told the judge that her father had threatened to go to the press with information about her.

Curtis was in an on-again-off-again relationship with Shane Maguire, a business partner of “The Gold Guys,” a chain of stores in Minnesota and California that buys and sells Gold items.

They have a son together that Nicole wanted to keep away from the limelight but in December 2015 he filed for paternity and joint custody. They broke up shortly before Nicole discovered she was pregnant. He was awarded both after the court ordered DNA test came back 99.4% positive.

Curtis tried and failed to modify the agreement so that Maguire could not have overnight custody of Harper until he’s 2 years old.

In July 2016 the News reported that she was barred from taking the baby to job sites where lead and other toxins are present. In August, the judge warned her that she could face jail time for not paying expenses incurred for missed parenting times and attorney fees. (She had reportedly taken the baby to New York City with her in August during one of Maguire’s scheduled visitations).

The former couple finalized their legal battle in 2018 and agreed on joint legal and physical custody of their son, Harper.

The court document stated that Curtis and Maguire will “share equal responsibility and decision-making authority” for Harper’s wellbeing, including his health care, education and religious training and will confer with one another about “all matters of importance.”

They also agreed not to do or “say anything in the presence of the child that portrays the other … in a negative or false light, or that will tend to discredit or damage the love that the child and the parents have for each other.”

The document also details that neither parent can alter Harper’s appearance without the other’s permission, something that became an issue after Curtis alleges Maguire gave Harper his first haircut without telling her because he “looked like a girl.”

Nicole is a mother of two sons Ethan, born on December 24, 1998 and Harper born in 2015. She had her first child with Steven Cimini but the relationship ended and raised her son as a single mother. In 2001 Cimini was ordered by the court to pay child support. In 2018 she filed a motion for contempt against Cimini claiming she owed almost $15k in back child support.

Nicole is not married but she is in a relationship with Ryan Sawtelle.

Curtis is in a relationship with Ryan Sawtelle since 2018. Sawtelle is the founder and executive director of the White Heart Foundation, a military nonprofit. The couple first met after Curtis began following Ryan’s Instagram posts about his 8-year-old niece Arden’s battle with Diffuse Intrinsic Pontine Glioma (DIPG), an aggressive brain tumor found in children.

Curtis in an interview with PEOPLE magazine said; “We were coming up on the one year anniversary of [her friend’s 9-year-old daughter] Tessa’s death and when he posted that Arden had died, I was crushed. I cried for Tessa and also, I sat there crying knowing the struggles his family would be facing in the upcoming days, weeks, years. I reached out to him to see if we could help in anyway and also, to let them know we were all praying for them.”

During their first time meeting, she said they made a pact to have all light-hearted conversation and avoid no mention of cancer. They later connected a few days later when Sawtelle helped her shoot a Rehab Addict promo.

“I wanted a motorcycle in it, and he had one. When we finished, he asked if I wanted to take a ride. I was in no place in my life for a relationship so I didn’t really connect the dots, but looking back we’ve agreed this was a first date. Sunset on the back of a motorcycle next to this guy staring at the ocean – a pretty good one at that!”

Nicole is a realtor who took the job as a real estate agent when she moved to Minneapolis and began renovating properties on the side. A local TV production company approached her about appearing as a real estate expert on the show Sweat Equity but she took the opportunity to pitch a series of her own, and Rehab Addict was born.

Nicole is the host of Rehab Addict on HGTV, a reality television show documenting home renovations. The show debuted on the DIY network on October 14, 2010 but in 2014 during its fourth season it was moved on HGTV.

On January 28, 2021 a new show Rehab Addict Rescue will premier on HGTV and will also air on discovery+. The show will follow Nicole as she restorers olf properties.

In each episode, Nicole will identify the homes’ must-haves: new electrical wiring, updated plumbing and structural repairs. With any leftover budget, she and the homeowners will then tackle the properties’ beauty projects with a little elbow grease, including reviving original hardwood floors, refreshing kitchens and bathrooms, and enhancing original architectural elements.

She has an estimated net worth of $7 million.

The card that started it all ? back in the day, my Sundays were spent hustling open houses. Going live with one of my colleagues from back in the day to showcase our latest and greatest. (AND, of course, I still have that sweater shirt) #1522hillside #imarealtor #kellerwilliams