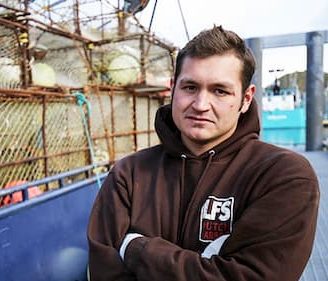 Nick McGlashan was a start on Discovery’s reality series Deadliest Catch which was about crab fishermen. He was a seventh-generation fisherman who grew up on the island of Akutan, Alaska. He died on December 27, 2020 at the age of 33.

He was 33 years old at the time of his death.

Nick hails from a family of fishermen. His father Bruce Lanford, is a veteran commercial fishing ship captain. He was named after his great uncle Nick McGlashan, who worked on the first boat rumored to have pioneered the U.S. crab industry, the F/V Deep Sea, built in 1947. Two of Nick’s aunts were also crabbers; one was lost at sea when the boat sank in 1986.

He was not married but was in a relationship with Claire Hammond.

He has a daughter known as Lennyn.

McGlashan was a cast member of Deadliest Catch on the Discovery channel. He appeared in 78 episodes. The show follows crab fishermen aboard fishing vessels in the Bering Sea during the Alaskan king crab and snow crab fishing seasons.

His bio on Discovery says that he was a 7th generation fisherman who was raised not far from Dutch Harbor on the nearby island of Akutan, Alaska.

He began crabbing at the age of 13 on the Bering Sea on the F/V Westling, the first boat of his father. “After leaving school with a pile of homework, he would head to work on the boat, and the crew would help him with it in between strings. Nick started working for Wild Bill in 2011 on the Kodiak and quickly earned Bill’s respect. He headed the crew when Bill ran the Cape Caution and when he eventually bought the Summer Bay.”

“Nick is known for his witty quips, working through the pain, and not stopping the job until its done. He has also kept the boat running through all kinds of mechanical issues, manufacturing quick fixes on the fly. Nick has a wealth of fishing experience and, according to Captain Bill, is the epitome of a true crabber.”

Nick struggled with drug addiction which saw him get kicked off the boat in season 13 and landed him in rehab. He did an interview with Chosen Magazine where he revealed he was abusing vodka, heroin, and meth and overdosed three times before getting sober in September 2016, when he went to treatment.

“My life went from Bering Sea badass to full-blown junkie very rapidly. Hidden from me was that passion I had for life. Taken from me was my ability to live. I was at war with my addiction and it was winning.”

He added that he stayed sober by surrounding himself with like-minded people, living a 12-step program, going to meetings, and working with a sponsor.

“The greatest thing about my recovery is that I can change someone’s life just by talking about my addiction and recovery. Being sober used to feel uncomfortable, it felt weird. I had been loaded for so long, sober scared me. I live a life that inspires. I don’t live a life to inspire anymore.”

Nick died on December 27, 2020, his death was first reported by TMZ. His sister, Lydia confirmed the news through Twitter, she tweeted; “My brother nick passed away. This is the hardest thing I’ve ever had to go through. Please hold your loved ones tight.”

My brother nick passed away. This is the hardest thing I’ve ever had to go through. Please hold your loved ones tight.

Nick McGlashan Cause of Death

His cause of death has not been made public yet.

It is not clear what caused Nick’s death. His death however comes five months after the death of Mahlon Reyes, his co-star who was a deckhand on Deadliest Catch. He died on July 27 at the age of 38 of a heart attack.

It is not clear whether he was suffering from any illness at the time of his death.