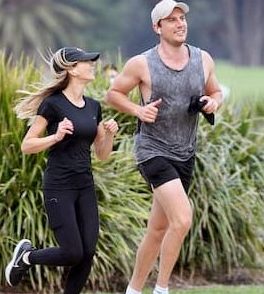 Nathan Brodie is the mystery man who is believed to be Nadia Bartel’s new man after they were spotted jogging in Melbourne’s Albert Park on September 18, 2020. Nadia is a fashion designer and lifestyle and beauty blogger who runs the label Henne. She is the ex-wife of Geelong Football Star Jimmy Bartel.

There is no available information regarding his age or what he does for a living but the article will be updated as soon as we have more information about him.

Nadia Bartel is said to be dating Nathan Brodie after they were spotted jogging in Melbourne’s Albert Park on September 18, 2020. This is the first time Nadia was spotted with a man since her split with AFL star ex-husband Jimmy Bartel more than a year ago. The two were later seen wearing face masks, after their workout in the park and were seen getting back inside Nathan’s Range Rover.

Nadia announced her split from her ex-husband Jimmy Bartel on August 15, 2019. The couple share two sons Aston James Bartel and Henley Roy Bartel.  In a statement to The Herald Sun she said;

‘It’s been a very difficult month for me and the boys. Although I’m heartbroken, I don’t want to comment specifically on what’s been reported about Jim’s trip to the UK as I don’t think that is in anyone’s interests. My single focus now is to continue to protect, care and provide for my two beautiful boys as this is a personal matter. I am so thankful for my very supportive family and friends.’

Who is Nadia Bartel

Nadia is an Australian Fashion designer and blogger who graduated from the La Trobe University in 2007. She is the founder of Chronicles of Nadia blog, director of theconnection.co fashion clothing brand and co-founder of sprayaus.com.au Tan Removing spray company. Prior to joining blogging she had a career in advertising. She has also done modeling work, having been featured in Westfield’s 2013 Autumn/Winter campaign.

She had been married to Australian footballer Jimmy Bartel since 2014 until their split in 2019. The couple has two children together Aston James Bartel and Henley Roy Bartel.