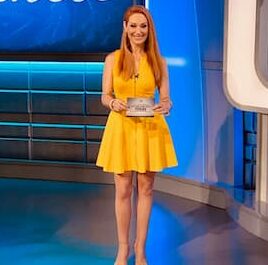 She has not publicly revealed her age or her birth date.

She has a bachelor’s degree in English from the University of Toronto.

Newman hasn’t revealed the names of her parents and siblings nor does she post them on her social media. She has however revealed that she is the firstborn. She said that when her mother got pregnant with her she prayed that her little girl look like Audrey Hepburn.

“Mom told me a story — She told how when she found out she was pregnant with her first child (me 😊) she prayed for all the things Mom’s pray for, that their child be healthy, happy, fulfill their dreams etc. — But she also added a special request, if she had a girl, may her little girl please look like Audrey Hepburn”

Nancy keeps her personal life very private. There is no public information available regarding her marital status.

Nancy is a studio host for the New York Yankees and the Brooklyn Nets pre- and post-game shows and lead anchor for YES’ Yankees Batting Practice Today show. She joined the network in 2003. In addition, she also hosts the Network’s Yankees Magazine program which goes behind the scenes and in the community with the New York Yankees.

She has served as YES’ Yankees reporter as well as a sideline reporter for the network’s Ivy League college football package and New York Football Sunday and is now host for The New Era Pinstripe Bowl college football coverage on YES.

Prior to joining YES Network, she worked for CNN Network (1992-2002) where she held various sports broadcasting positions. She hosted CNN Sports Tonight and Latenight as well as CNN Sports Sunday and CNN’s Goodwill Games Preview. In addition, she hosted and worked on programs for CNN Sports/Illustrated and CNN Headline News for which she anchored sports. She served as occasional reporter for CNN’s weekly MLB and NFL preview programs and appeared as a panelist on CNN’s Burden of Proof discussing the NHL. In 2000, she hosted Turner Sports’ Emmy-Award-winning coverage of the NHL Atlanta Thrashers inaugural season.

She worked for The Sports Network (TSN), before joining CNN, where she worked from 1990-1992 covering Major League Baseball, the NFL, the NHL and horse racing. Her reporting garnered a 1991 Sovereign Award for Outstanding Broadcast. She has also worked for NBC as an events reporter for the 2004 Olympic Games in Athens, Greece.

Her annual base salary is estimated to be around $40,000.