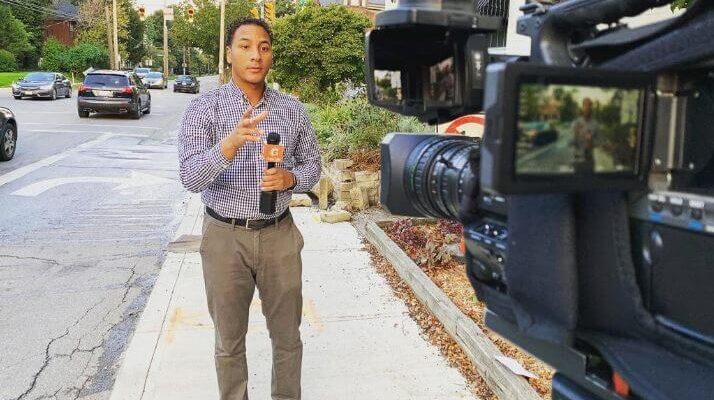 Myles Harris is a reporter for WSYX, a virtual channel 6,  ABC/MyNetworkTV/Fox-affiliated television station in Columbus, Ohio. He is in the headlines after a video was captioned while his mom happened to drive by as he was in the field reporting on Tuesday, Feb 22. In the video, his mom Sand can be heard yelling, “Hi, baby!’ as she waves out the window as she approached Myles.

His exact age is not on record but based on our estimates by considering the age individual complete college, he is in his late 20s.

Myles grew up in northeast Columbus, Ohio where he graduated from St. Francis DeSales High School. He later joined Wright State University for a Bachelor’s degree in Mass Communication/Media Studies from 2010 to 2015 as per his Linkedin. While at Wright, he played Division I tennis and was during his senior year, Myles co-hosted a radio show called the “Raider Sports Scene” which is where he kick-started his career in media.

Myles Harris joined the ABC 6 / FOX 28 team as a multi-media journalist in 2021 as per his biography.  He happens to report in his hometown which tells a lot about the incident where his mother happened to drive by while he was reporting. He says he is excited to report news in his hometown.

Myles started at ABC6 in production and learned the ropes of working in the newsroom after his graduation from college. He would assist with high school football coverage in his overtime and is now the sideline reporter for Friday Night Rivals on the CW Columbus.

Myles worked as a digital reporter with Ohio 24/7 Now, delivering local news on Sinclair’s mobile app. He has also worked as a Production Assistant for Sinclair Broadcast Group WSYX ABC 6/WTTE FOX 28 from Jun 2015  to Oct 2018. He listed his activities as setting camera shots for on-air news, running the teleprompter for anchors, providing support and direction on the studio floor throughout on-air news, and running audio during a show.

Myles lists his hobbies as playing tennis, exercising, watching sports with friends and cheering on the Buckeyes on Saturdays.