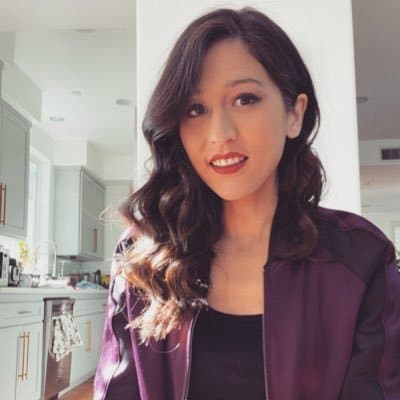 Mina Kimes is an American investigative journalist that focuses on business and sports reporting. She serves as a senior writer for ESPN and an NFL Live analyst. She’s written for Fortune, Bloomberg News, and ESPN, among other publications.

Kimes is of Korean heritage from her mother’s side. She and her family moved to Arizona when she was a teenager.

Mina Kimes was born to an American father who served in the military and is a defense contractor, and a Korean mother whose identities are unknown. Her father taught her how to drive.

She has a brother called Isaac Kimes. He is an attorney by profession.

Mina Kimes is married to Nick Sylvester, who is a music producer. Nick previously worked as a music reviewer, writer, and associate editor at Pitchfork. The two married in 2015 and are reported to have started dating about 2012. They also have a dog named Lenny and live in Los Angeles.

Kimes works for ESPN as an NFL analyst, senior writer, podcast presenter, and TV contributor. Her prominence has rapidly risen throughout ESPN The Magazine’s multimedia platforms, including digital and print, television, radio, and podcasting since she joined the organization in 2014. Mina joined ESPN’s daily news and information broadcast, NFL Live, as an NFL commentator in June 2020. She also contributes to Around the Horn and Highly Questionable and provides football analysis on Get Up, SportsCenter, First Take, and other shows.

Additionally,  Kimes is a well-known writer who has contributed to ESPN with a number of outstanding features. When ESPN The Magazine shifted to a new digital format in October 2019, she published the first ESPN Cover Tale – the miraculous survival story of NFL wide receiver DeAndre Hopkins and his mother. She previously co-hosted ESPN Radio’s national weekend show The Morning Roast with Domonique Foxworth and Clinton Yates, which the trio began in January 2017.

Moreover, she’s also been on special ESPN live Twitter broadcasts, such as On the Clock during the 2018 NFL Draft and the SportsNation NFL Draft digital show in 2021. Kimes formerly worked as an investigative reporter for Bloomberg News (2013) and as a business journalist for Fortune Magazine (2007-13), where she wrote about everything from arms exports to faulty drugs.

Mina is the host of ‘The Mina Kimes Show featuring Lenny’ podcast where she discusses football.Her friends join her on each episode to discuss the newest NFL storylines, with her football-obsessed dog, Lenny, making frequent appearances. She debuted the ESPN Daily podcast in October 2019.

Mina has a tattoo ‘XLVIII’ on the inside of her right bicep. In an article, she revealed that in January 2013, shortly after Falcons kicker Matt Bryant punched in a last-second field goal to knock the Seahawks out of the playoffs together with her big brother they made a pact that if Seattle ever won the Super Bowl they would get a matching tattoo to commemorate the event.

The controversy between Mina Kimes and barstool-sports founder Dave Portnoy began on November 5, 2021. At the time Dave was accused of rape and Mina tweeted on the article that ‘there are way too may people who still don’t understand the concept of consent.’

This is a really upsetting, well reported story. And judging by the replies—there are way too many people who still don’t understand the concept of consent. https://t.co/3Chdp4gdkV

It later turned out that the accusations were false and Dave has continuously continued to attack Mina on Twitter since then.

Checks notes: @minakimes has not retracted her endorsement of a clear hit piece designed to ruin my life and business. She was lightning quick to condemn me. Her actions were irresponsible and dangerous. So yeah I like to remind people she is a colossal fraud time to time https://t.co/veSF7MyDzF

In January 2022 Mina was attacked on Twitter by former 49ers QB Jeff Garcia after her comments about Jimmy Garoppolo. During an appearance on “First Take” Mina said “Jimmy Garoppolo isn’t the reason they’re winning. “They’re winning with him, but not because of him. . . . He posted the second-lowest QBR in 15 years [against the Packers].”

Kimes had a point as the only advantage that Garoppolo has over the lower-tier players is that his team has won both of its games. But as Kimes pointed out, Garoppolo nearly threw two more interceptions in the 49ers’ 13-10 win over the Packers, and those could have cost his team the game. “He was trying to give away the game in the second half.” Kimes said.

Jeff tweeted; “Who the hell is Mina Kimes and when is the last time she threw a touchdown pass in a game? Never! Ever! has she taken a snap or can truly understand the ability, the mindset, the physical and mental toughness, that it takes to play the QB position or any position in the NFL.

The fact that there are people out there given a platform to talk about something that they have never done is hilarious and that’s how you have to look at her, she’s a joke! So let’s just laugh at her and support Jimmy, root on our Niners to go out and beat the living f—k out of one more team. That’s what it takes. She will never know that feeling. Can I get an amen? Peace.”

Jeff was criticized for his comment which he argued was not sexiest. He said his comment had nothing to do with Kimes being a woman and were more about showing his support for Garoppolo.

“There was nothing sexist from what I had to say, outside of the fact that, yes, women don’t play professional football, there are women that do participate in football, but had it been a man saying the same thing, I would’ve had the same response for that man who has never stood in the pocket, who has never delivered a touchdown pass, has never taken a hit to the head while trying to make a play from within the pocket.

To be able to sit there and criticize someone at the level Jimmy Garoppolo is at, at the level any of these quarterbacks are at, at the level that I played at and say that it was sexist, misogynistic — people wanted to say there was racism behind it — people wanted to break me down as a player. What you think, whatever you want to say, it doesn’t matter to me. All I care about are what Niners fans and faithful think, what my family thinks, what my close friends think. That’s all that matters.”

Kimes, a two-time finalist for the Dan Jenkins Medal for Excellence in Sportswriting, won first place in the National Headliner Award for magazine feature writing in 2019. She has also won numerous honors for investigative and business journalism. Mina was the first recipient of the Larry Birger Young Business Journalist medal from the SABEW (Society of American Business Editors and Writers), which honors journalists under the age of 30. The New York Press Club, the National Press Club, and the Asian American Journalists Association are among the organizations that have honored her work (AAJA).