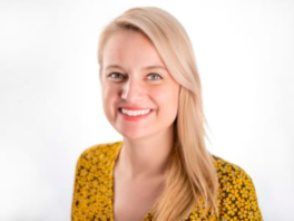 Magan Graham is the reporter for CMO Today, at The Wall Street Journal.  She was a reporter for CNBC covering advertising and marketing. She previously worked at Ad Age, where she covered ad agencies and holding companies.

Magan stands at a height of 5 feet 7 inches tall.

Megan is an alumnus of the University of Illinois where she earned her Bachelors’s Degree majoring News-Editorial Journalism and minoring in Political Science in 2012.

Megan has not gone public with details regarding her family since she is a very private person and likes to keep her personal matters away from the public.

Megan has not disclosed her marital status to the public. It is not publicly known whether she is married, dating, in a relationship, or single. This information will be listed once it is publicly out.

Megan was a reporter for CNBC.com covering advertising and marketing. She previously worked at Ad Age, where she covered ad agencies and holding companies. Before that, she covered startups and tech for the Chicago Tribune’s Blue Sky Innovation and business and breaking news at the Chicago Sun-Times.

Megan serves as a reporter for CMO Today at The Wall Street Journal.  She joined the team in August 2021.

Graham previously spent two years as an advertising agency reporter for Ad Age. She covered many of the seismic changes at major ad holding companies, including Martin Sorrell’s departure from WPP and how technology is changing the way agencies work with their clients.

Prior to Ad Age, she wrote about technology and start-ups for the Chicago Tribune. Before that, she covered breaking news and business at the Chicago Sun-Times.

Graham also worked at the Kokomo Tribune as a business reporter.

Megan has not gone public with her salary figures.

Magan has not yet disclosed her net worth to the public.