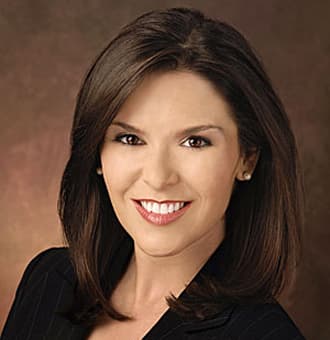 Meg Oliver born Megan Elisabeth Oliver is an American media personality working as a correspondent and anchor for CBS News reporting for CBS This Morning and the CBS Evening News weekend. She previously worked at ABC News as a correspondent reporting for Good Morning America Weekend Edition and ABC World News and also worked as a reporter and anchor for KCFW-TV, WWJ-TV, and WKBD-TV in Detroit, Michigan.

Meg was born on 7 December 1970 in Birmingham, Michigan, United States.

Oliver attended Marian High School and later earned a Bachelor of Arts degree in Journalism from the University of Montana.

Meg was born and brought up by her parents but she has not revealed any information regarding them. It’s also not known if she has any siblings.

Meg is married to John Basinger, a corporate lawyer and a graduate of Harvard University. The duo met through a Montana connection in early 2000. John and Meg exchanged their marriage vows on October 18, 2002, at an intimate ceremony. Back on 19 October 2017, Meg shared a photo of their 15th year anniversary with a caption,” 15 years ago life got better”.  She posted another photo of their 17th-anniversary celebration on October 18, 2019.

Meg and her husband are proud parents of three children, two sons, and a daughter. On August 29, 2006, they welcomed their first daughter Maria Basinger and on May 9, 2008, their second child and eldest son Tommy Basinger was born and on March 9, 2011, the duo welcomed their third child Cormac Basinger.

Meg joined CBS News in 2015 as a correspondent and anchor. She currently reports for CBS This Morning, the CBS Evening News, CBS Newspath and is a fill-in anchor for their 24-hour digital network CBSN. Meg is known for her ability to report on a wide range of topics from breaking news to features. She reported from London after the terror attack on London Bridge and covered both Hurricane Harvey and Hurricane Irma extensively and reported from San Antonio after the Texas Church shooting. In the fall of 2017, Meg spent days canvassing the state of Utah reporting on the plight of thousands of wild horses facing slaughter. Oliver also covered the story of the missing Florida teenager who ran away with her soccer coach. After the teen was found safe thousands of miles away in Syracuse, New York Meg was the only network correspondent with a sit-down interview with the parents.

On CBSN she has covered extensive live breaking news from the San Bernardino shootings to the murders of WDBJ’s Allison Parker and Adam Ward. In March 2006, she became the anchor of the overnight CBS newscast, Up to the Minute, and remained in that position for three years. She was also a correspondent for The Early Show, and fill-in anchor.

Prior to joining CBS, she worked at ABC News as a correspondent reporting for Good Morning America Weekend Edition and ABC World News with David Muir. She also filled in anchoring on World News Now. She also worked in Kalispell, Montana as a reporter and anchor for KCFW-TV as well as for Northwest Cable News at offices in Seattle, Washington, and Boise, Idaho. Oliver worked as a reporter in Hartford, Connecticut at WTIC-TV. From 1998 to 2001, she served as reporter and anchor for WWJ-TV and WKBD-TV in Detroit, Michigan. From 2001 to 2004, Oliver served as weekday anchor at KGPE-TV in Fresno, California.

Oliver’s journalism has earned her several Society of Professional Journalist honors as well as Associated Press Awards for breaking news and continuing coverage.