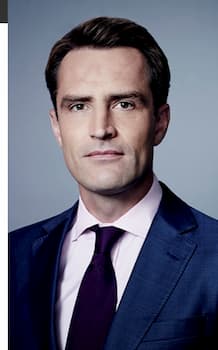 Max Foster is an Swedish-English  media personality working for CNN as an  anchor and correspondent based in London. He is the host of ‘CNN Newsroom with Max Foster’ which airs on CNN International Monday to Friday at 8a ET (1p London). He previously worked at the BBC as a business reporter for the BBC World Service and BBC Breakfast.

Foster attended The Ridgeway School  and later joined  Sixth Form College then  Dauntsey’s School, Devizes before graduating  from Cardiff University with a Bachelor of Science degree in Business Administration and also earned  a postgraduate diploma in broadcast journalism at Highbury College, Portsmouth.

Max has not revealed any information about his parents. It’s also not known if he has any siblings.

Foster is married to Hannah who studied  sociology and politics in Bristol.  She created and runs her own online emporium  giftpop.co.uk which she started in 2014. She previously worked at Addison Ross Ltd , picture frame supplier based in Newbury and she was tasked with looking after the department store accounts and also worked  as an event organizer in an exclusive London venue, George, on Mount Street where she was responsible for organizing parties and meeting and greeting people.

Max and his wife has three children together and the family lives in the Berkshire countryside.

Foster joined CNN International as London-based Business Anchor and Correspondent in 2005. After hosting special coverage around the failing health of Pope John Paul II, he was appointed permanent co-anchor of CNN Today with Monita Rajpal where he led special coverage of major events including the outbreak of the 2006 Lebanon War and the 2007 London car bombs. He also  broke the news that Hurricane Katrina had caused a breach in the levees around New Orleans and anchored a live six-hour simulcast on CNN and CNN International during the 2008 Mumbai attacks. Foster followed the early development of the street art movement by reporting on Banksy and Adam Neate.

In April 2009, Foster moved to European primetime where he interviewed all living Prime Ministers of the United Kingdom and  other Prime Ministers including those of Iraq, Sweden and Haiti, the presidents of the European Commission, Georgia and the Maldives; business leaders including Bill Gates, Alan Mulally, Jack Dorsey, Bob Dudley and Steve Jobs and celebrities like Dolly Parton, Diddy, Keith Richards, Michael Cain,  Carrie Underwood, Amitabh Bachchan and George Lucas. He devised a monthly show called Edit Room for CNN which went to air in June 2010 for a year. In it, he discussed news coverage with notable guests including Emma Thompson,  P. J. O’Rourke and the photojournalist Tim Hetherington shortly before he was killed in Libya.

In February 2013, Foster interviewed the Hollywood Actress Thandie Newton and she revealed the abuse she suffered on the casting couch as a teenager, a story that was picked up by other media. He interviewed the Dean of St Paul’s Cathedral the day before Margaret Thatcher’s funeral. David Ison spoke of the hurt and anger left by the former Prime Minister which was picked up on the front page of The Times and in other news outlets.

After reporting on the wedding of Prince William to Kate Middleton in 2011, Max  was given the additional title of Royal Correspondent. He traveled extensively with the couple  and Prince Harry  and secured several landmark royal interviews. In 2013 he interviewed Prince William shortly after the birth of his son, Prince George of Cambridge which made headlines worldwide.  In 2015, he interviewed The Prince of Wales to mark ten years of marriage to The Duchess of Cornwall and secured the first TV interview ever with The Duchess to mark her 70th birthday in 2017. In 2012 he interviewed Queen Margrethe II to mark her 40th jubilee (described as “remarkable” by The Times

In May 2014, Foster was promoted to Anchor/London Correspondent, retaining the royal brief but also heading-up all UK affairs. In August 2014, a British security source leaked intelligence to him about Russian military movements during the Ukraine crisis. A combative interview in January 2015 with Bobby Jindal about the existence of ‘so-called no-go zones’ in London was widely picked up by US media. During the US presidential campaign he also challenged Republican Donald Trump on his foreign policy. In February 2015, Foster was on air reporting on the identification of Mohammed Emwazi (previously “Jihadi John”) when a technical error brought up an image of Vladimir Putin.

Foster regularly anchors from the field on major breaking news and events including the Scottish independence referendum, the 2015 United Kingdom general election and 2017, the 2016 United Kingdom European Union membership referendum and the Grenfell Tower fire. He has also anchored from the scene of terror attacks across Europe including November 2015 Paris attacks,  the 2016 Brussels bombings, the 2016 Nice truck attack, the 2016 Berlin truck attack, the 2017 London Bridge attack and the 2017 Stockholm truck attack. Since May 2017 Foster has hosted ‘CNN Talk with Max Foster’ which is simulcast on CNN International and Facebook. He is a commentator on US affairs for LBC, trains anchors for CNN affiliates and regularly moderates and hosts public events for the likes of the United Nations World Tourism Organization.

Prior to joining CNN, Max also worked at Hospital Radio Swindon with his own weekly entertainment programme. At Cardiff University, he freelanced as a reporter for ‘Rave’ on BBC Radio Wales and BBC Radio Five hosted by Rob Brydon. He also did a work placement at BBC Wiltshire Sound in Swindon and later worked at  the BBC World Service as a business presenter-reporter and worked on its flagship Newshour programme. Foster made his name covering the Asian Financial Crisis and, at the age of 24, started hosting World Business Report (BBC World Service). In 2000, Foster went on attachment to BBC TV Business Programmes and stayed on. He reported for Business Breakfast, BBC World and Working Lunch before taking on a full-time position on BBC Breakfast. He had an exclusive on internet banking security which forced Abbey National (now Santander) to temporarily close down its online service, Cahoot. He also presented the business news and Breakfast Briefing alongside Moira Stuart.

Max has gone viral after putting a positive spin on the news by taking it upon himself to brighten thousands of people’s moods by joining the latest social media craze: TikTok. He has been uploading almost daily, hilarious videos on the app, which see him doing everything from his on-screen make-up, to forgetting his lines on air. His  antics have proven popular, earning him more than 85,000 followers – with one of his videos even racking up an impressive 1.7million views.

Max’s most recent video sees him impersonate world leaders clashing with their scientific advisers over ending lockdown. He mimes along to a softly-spoken American voice saying “you’re not gonna do it girl”, before adding: “I did it”. In another video he is seen rehearsing his lines before going on air, only to then chat gibberish as soon as the camera goes live. In another video he is seen “calling the government”, only to get the high-pitched panicked response: “Ev-ery-thing-is-o-k!” One user commented on his post: “This is using TikTok on a whole other level of productivity lol – love this.” The official TikTok account for the Washington Post even remarked on his clip about forgetting his script: “What a compelling story.”

Max is an international award-winning landscape and nature photographer that has a passion for the outdoors. His pursuit of unique conditions, striking contrast and incredible light has brought him around the globe, creating unforgettable landscape and nature images from our natural world. Extensive use of vibrant colors and refined compositions elevate Max’s work, which beautifully lends itself to large format fine art prints.

The images in these online galleries are available for sale as museum quality limited edition fine art prints, handcrafted using the ultimate in printing materials including Lumachrome Trulife® Acrylic, Fujiflex Crystal Archive Paper, as well as Roma and Omega Italian Wood Frames. The museum quality work produced from these online galleries have photo editions of 50-100 per image. Each made-to-order print arrives numbered and signed by the artist along with a certificate of authenticity for added provenance. Max and his team have years of experience creating the finest photographic art on the market. Max’s images hang in homes and businesses around the world,