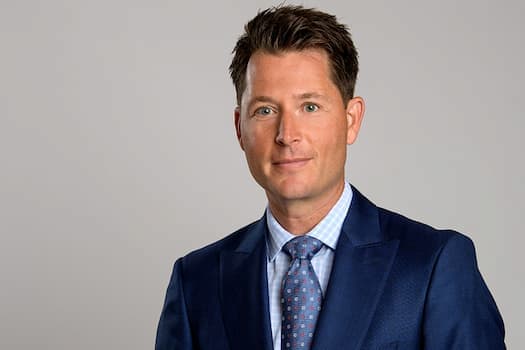 Barrie received good grades in high school and graduated with honors. Then he joined in the Walter Cronkite School of Journalism’s B.A. (Broadcast Journalism) program (Arizona State University).He was a regular participant in the college’s extracurricular activities and events.

He is a beloved son to Janelle Shea.

He is happily married to Ashley Monts Barrie. The duo tied the knot in an only- attendees ceremony on June 26, 2019.

Barrie joined ESPN in March 2013, as co-anchors SportsCenter at 12:00 ET on weekdays with Sage Steele. In addition to anchoring from the studio, Barrie has hosted SportsCenter on the Road from a variety of venues across the country. These have included, college campuses on Saturday mornings during football season, the Masters’ Tournament, and other events. Barrie’s ESPN responsibilities grew in 2019 when he was named studio host for college football Saturdays.

Prior to joining ESPN, Barrie worked for KXAS-TV in Dallas/Fort Worth, where he covered high school sports. Barrie has also worked as a radio and television sportscaster in Columbia, South Carolina. He also works as a golf analyst for ESPN’s coverage of The Masters and the PGA Championship. Barrie formerly worked as a sports anchor/reporter for WLTX-TV in Columbia, South Carolina. From  2005 to 2008, he co-hosted the Matt and Tim Show on 1400-AM “The Team,” the Columbia market’s highest-rated radio show.

Along with that, he presented the weekly Saturday Night Blitz and Gamecock Extra college football shows for WLTX. He also provided live streams from the Independence Bowl (2005) and Liberty Bowl (2006). (2006). Barrie began his career as the principal Green Bay Packers and Wisconsin Badger’s reporter at WJFW-TV in Wausau, Wisconsin (2001-02). He previously worked as a sports host/reporter for KSWO-TV in Lawton, Oklahoma, from 2003 to 2005. Moreover, he delivered live coverage of the Big 12 title and BCS National Championship games in 2003 and 2004. Barrie has also hosted College GameDay on ESPN Radio during his stint at ESPN. He also debuted as the host of the Scripps National Spelling Bee in 2018.

Barrie has won 11 Emmy awards and three Edward R. Murrow journalism honors during the course of his career. Barrie worked as an anchor/reporter for KXAS, NBC5 in Dallas from 2008 to 2013, where he hosted weekend sportscasts such as Sunday’s Out of Bounds. He was also honored with the 2010 national and regional RTDNA Edward R. Murrow Award, five Lonestar Emmy Awards, including Sports Reporter and Sportscast, and the NABJ Award for “Salute to Excellence” for his live coverage of the Cowboys, Rangers, and Mavericks.

He earns a salary of approximately $87,000 annually.

His networth has amassed to approximately $1.5 million.