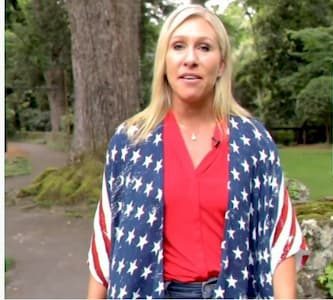 Marjorie Taylor Greene is an American businesswoman and politician who owns a construction company. She is a QAnon conspiracy theory supporter who won the Republican nomination for the 14th congressional district and is expected to be elected in November.

She has a bachelor’s degree in business administration from the University of Georgia.

Taylor is married to Perry Greene who owns a construction business. The couple has been married for 23 years.

She is a mother although there is no available information about her children.

Taylor supports Qanon, a conspiracy theory that began in October 2017, when a pseudonymous user of the online message board 4chan started writing cryptic posts under the name Q Clearance Patriot.

According to the New York Times, the person claimed to be a high-ranking official privy to top-secret information from the President’s Trump’s inner circle. Some of the conspiracies involve a global cabal of politicians and celebrities controlling governments, media, banks and a child sex-trafficking ring.

In a YouTube video, Taylor praised “Q” – the pseudonymous figure who started the conspiracy theory – as a “patriot”.

Several social media sites have taken action against QAnon, with Twitter banning thousands of accounts linked to the conspiracy theory and TikTok blocking hashtags related to it from appearing in search results, among other measures. The FBI has designated QAnon a potential domestic extremist threat.

POLITICO uncovered Facebook videos in which Taylor Greene expresses racist, Islamophobic and anti-semantic views. In the videos she suggested that Muslims do not belong in government; thinks black people “are held slaves to the Democratic Party”; called George Soros, a Jewish Democratic megadonor, a Nazi; and said she would feel “proud” to see a Confederate monument if she were black because it symbolizes progress made since the Civil War.

According to POLITICO, Greene described Islamic nations under Sharia law as places where men have sex with “little boys, little girls, multiple women” and “marry their sisters” and “their cousins.” She suggested the 2018 midterms — which ushered in the most diverse class of House freshmen — was part of “an Islamic invasion of our government” and that “anyone that is a Muslim that believes in Sharia law does not belong in our government.”

In another rant, she urged adherents of Sharia to stay in their own countries and leave the U.S. alone.

“If you want Islam and Sharia law, you stay over there in the Middle East,” she said. “You stay there, and you go to Mecca and do all your thing. And, you know what, you can have a whole bunch of wives, or goats, or sheep, or whatever you want. You stay over there. But in America, see, we’ve made it this great, great country. We don’t want it messed up.”

In other videos, she directly compared Black Lives Matter activists to the neo-Nazis and Ku Klux Klan members who marched at a white nationalist rally three years ago in Charlottesville, Va., denouncing them all as “idiots.” And Greene forcefully rejected the notion there are racial disparities in the U.S. or that skin color affects the “quality” of one’s life: “Guess what? Slavery is over,” she said. “Black people have equal rights.”

In one video while talking about unemployment she said is due to the product of “bad choices” and being “lazy.” She added that minorities are being held back in society by gangs, drugs, a lack of education, Planned Parenthood and abortions — “not white people.”

She later implied that black women have it easier because of affirmative action, complaining they are more likely to get into a college than a white male if they have the same GPA.